All of the Bible-based fiction available from Bible Tales Online is listed below – printed books, eBooks and audiobooks.  Links make it easy to purchase products from our secure, easy-to-use, Shopify-powered online store at www.BibleStories.online. Sometimes it takes a few days for newly-released items to appear in the store. However, new items are always announced in the weekly newsletter and orders for them can be placed via return email.

EBooks and paperbacks bought from us are covered by our “But that’s wrong!” Money Back Guarantee.

COVID-19 has made shipping quite difficult since many common shipping options are not available at the moment. All shipping outside Australia is subject to confirmation.

All our plans for the future will only take place if the Lord wants it to be so.

To go directly to a book or series of Bible-based fiction, click on one of the links below:

We have also published one (free) reference book. For more information, click on the link below: 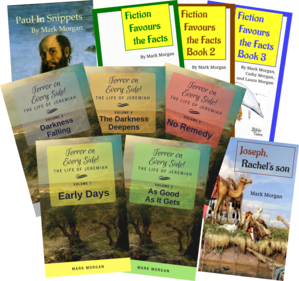 We aim for excellence in grammar, correct spelling and consistency in presentation: English is important to us.  If you need editing services, Cathy can help. See Copy editing and proofreading.

A novel begun during National Novel Writing Month (NaNoWriMo) in 2019 and released on 14 December 2021.

King Asa has ruled for many years, but his time is running out. The unfortunate mistakes of the past continue to haunt him, and trouble is brewing in Judah.

The nation is surrounded by dangerous enemies as the king’s health fails and pain weakens his lifelong faith. Enemies from outside the kingdom are surely to be expected, but are there also enemies within? The old king is widely-loved, but his bitter refusal to accept criticism has led him to oppress innocents. Could they be seeking revenge?

Passing on his faith to his son, Jehoshaphat, was always his greatest desire and in that he had been successful. But Jehoshaphat is beginning to ask questions about the past, and Asa is uncomfortable. If the truth comes out, could his opponents turn his son against him?

Jehoshaphat is ready to rule, and the country needs an active, faithful king to lead it. Yet Asa’s confidence is failing, and rumours of rebellion prey on his mind. Is Jehoshaphat in danger from traitors who may want to kill both the king and his successor? Who can guard the prince and keep him safe as he begins to take over the kingship from his ailing father?

Is Ben-hail the answer? A rising champion: fearless in battle, unequalled in swordsmanship, loyal and trusted by all.

Prices above in Australian Dollars.

Some background articles are being added to the Jehoshaphat category of the Bible Tales Blog.

A novel begun during National Novel Writing Month (NaNoWriMo) in 2017 and released December 2018. 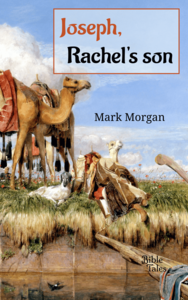 A young boy with 11 brothers; favourite of his father; chosen of God.

Joseph, Rachel’s son, lived a privileged life in Canaan until his jealous brothers sold him into slavery in Egypt. There, the favourite son learned hardship and faced undeserved punishment.

Overcoming one trial after another, he finally faces the greatest test of all: power over his brothers. When they bow before him – as prophesied so many years before – will he take revenge, or show the forgiveness that comes from God?

Beloved son, envied brother, betrayed slave, hopeless prisoner, ruler of Egypt, but, above all, servant of God – this is Joseph’s story.

Recognised by Independent Press Award 2019 as a “Distinguished Favorite” in the category Religion: Fiction.

Some background articles can be found in the Joseph category of the Bible Tales Blog.

Joseph: Timeline and family tree
The birth of Jacob’s sons
Where was the prison?
Joseph: maps

Terror on Every Side! The Life of Jeremiah

A novel – Bible-based fiction – about the prophet Jeremiah in five volumes (each available in paperback, hardcover, eBook and audiobook):

Immerse yourself in the mind and mission of Jeremiah through the unabridged audiobook, read so satisfyingly by Chris Morgan that when he finishes, you will be left wanting to start listening all over again!  Click on a link below for a free sample.

Let your imagination wander with Jeremiah through ancient Israel on an eBook reader or curled up in bed with a perfectly sized paperback.  See below for free samples.

An ever-growing smorgasbord of background articles ranging from scrolls to birds, from walking to feasts and many other subjects can be found in the Jeremiah category of the Bible Tales Blog.

From Anathoth to Jerusalem – Walking
Roads in Old Testament Times
Pottery
Scrolls
The city gates of Jerusalem
Cisterns in Bible Times
Sandals
Calendars
The Book of the Law
Copying
The year in Israel – Rain
The year in Israel – Feasts
Birds
High places
Keeping the Passover
Mourning
Washing in Bible times
Weapons and warfare
Nebuchadnezzar’s second attack on Jerusalem
Nebuchadnezzar’s final attack on Jerusalem
Nebuchadnezzar destroys Jerusalem
Destroying Solomon’s Temple
Covenants
Oaths and promises
Quotations from Jeremiah
What did God think of his priests?
Habakkuk
Habakkuk – Prayer and Violence
Zephaniah
Other books in Bible times
Jeremiah in Greek
Words in Jeremiah
The Sabbath
“Other gods”
Anointing Bible Kings
Marriage in the Bible
Silence?
Priest or prophet?
The stocks
Languages around Israel
Why is Jeremiah out of order?
Chronological order of Jeremiah
Seals and signets
The Rechabites
God’s communication
A cup of anger
Sieges in Bible times
Did King Josiah make a difference?
Family friendships
How did he die?
Was it really so bad?
A king’s mother
What should we call him?
Babylonian or Chaldean?
Were prophets and priests meant to fight?
Jeremiah in Egypt
Polluting the land
Jeremiah: Maps and Locations
Jeremiah: Timeline
Jeremiah: Family trees
Jeremiah’s family and genealogy
“Terror on Every Side”
Bible records in the time of Jeremiah
Terror on Every Side! List of Characters

From a family of priests in the peaceful reign of good King Josiah, came a young man Jeremiah, bringing words from God to his people.  It was no message for the fainthearted, either.  It was a message of Terror on Every Side!

A young king and a young prophet.  What could they do together for the people of Israel?  Could the disaster be averted?

“An immensely readable work of fiction that will help you understand the prophet Jeremiah as never before..”
More reviews…

The second edition with extra resources is now available including 3 family trees, 3 maps and a timeline.

Second Edition with extra resources (print and eBook only) 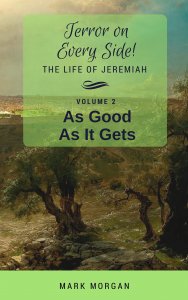 In his eighteenth year as king, Josiah turns his attention to the temple in Jerusalem.  King Josiah wants to worship Yahweh, but no-one can properly guide him in this until suddenly, the long-lost book of the law of Yahweh is discovered in the temple.  At last, the will of Yahweh is made clear – but what a terrifying message of judgement it contains!

Can King Josiah turn his nation around?  They join him in celebrating the Passover like never before, but is the reformation genuine? 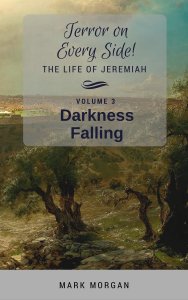 Josiah’s tireless work for God continues to the very end, but can a king really change an unwilling nation?

Darkness is falling on Judah.

But what about the individuals who listened to Josiah and Jeremiah and shared their faith in God? Will God protect them when the Babylonian army arrives? 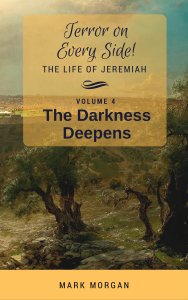 Jehoiakim’s body is dumped outside the gates of Jerusalem, and his son Jeconiah reigns briefly over a city under siege.

Jeconiah surrenders and King Nebuchadnezzar takes him to Babylon – as Jeremiah had predicted – along with thousands of others.

Zedekiah promises to be Nebuchadnezzar’s vassal, but is weak and easily led. Will he listen to Jeremiah or to his own advisors?

Can Jeremiah survive the sly schemes of his enemies, or will the promised disaster overtake them all?

In Judah, the darkness deepens. 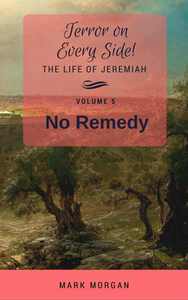 Volume 5 – No Remedy is the last volume in the series about Jeremiah.

King Nebuchadnezzar has lost patience, and Jerusalem will pay the price. Zedekiah continues to vacillate instead of providing godly leadership. Disaster is approaching as the Babylonian army waits outside the city and food starts to run out.

No-one would believe Jeremiah’s words until it was too late – and then there was Terror on Every Side! The only hope left is to follow Jeremiah’s advice and surrender to King Nebuchadnezzar. But who would dare to do that? 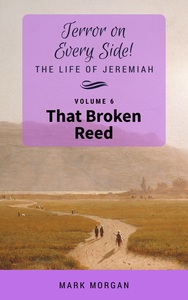 Volume 6 – That Broken Reed is a new sequel to No Remedy and goes on sale, God willing, on Tuesday, 28 February 2023.  The book is now available for pre-order at special introductory prices.

The leaders of the pitiful remnants of Judah’s army reject God’s command to stay in Judah. Afraid of Nebuchadnezzar and his hordes, they flee to Egypt, taking Baruch and Jeremiah with them – against their will. After making the long journey south, they hope to find peace and safety in Egypt. Yet God’s plans have not changed, and Jeremiah is still with them as God’s voice – they cannot escape his warnings of a terrifying future. Will they listen this time?

Meanwhile, far away in Babylon, new terrors are brewing: King Nebuchadnezzar has plans for Egypt…

I want part of Chapter 1!

The Book of Jeremiah ...in Chronological Order 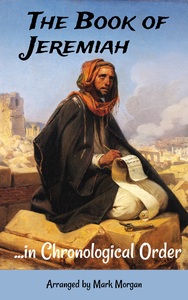 While writing the Biblical fiction series “Terror on Every Side!” about the life of Jeremiah, I needed to know the order of the events and prophecies reported in the book of Jeremiah.

The book of Jeremiah includes some passages that are anchored to particular days, while others are not located in time at all. By itself, this would make it hard enough to work out exactly when things happened in Jeremiah’s life, but the situation is worse than that: even the passages with dates are not in order!  This book is an attempt to put the book of Jeremiah in chronological order.

The Book of Jeremiah …in Chronological Order includes the Biblical text and footnotes from the US edition of the World English Bible (WEB) which has been released into the public domain. The text has been re-ordered to achieve chronological order as far as can be determined but has not been modified. 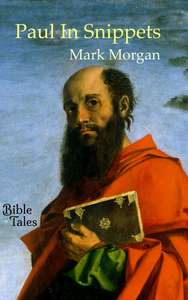 Snippets from the life of Paul the Apostle pasted on to a framework of the Acts of the Apostles.

A novelette based closely on the Bible descriptions of the life of Saul of Tarsus – renamed Paul.  Through three exhausting missionary journeys, a dangerous trip to Rome as a prisoner, and several years spent in prison because of vindictive enemies, we marvel at the stamina and determination of this man who could never do enough to repay Jesus for his grace and forgiveness.

Micro-tales are Bible-based fiction included in the Bible Tales weekly newsletter and collections of the stories are released from time to time. 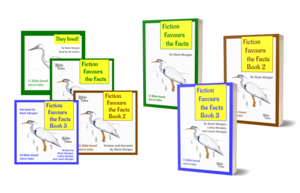 They lived! – A first audio collection of Bible-based micro-tales

An audiobook containing the first 11 micro-tales from the Bible Tales Newsletter.  Listen to Bible-based fiction read by the author.  Note that these recordings are also included in the Fiction Favours the Facts audiobook described below. 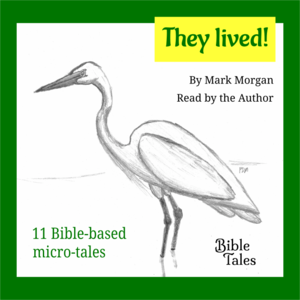 A collection of the first 22 “micro-tales” of Bible-based fiction from the Bible Tales Newsletter in paperback, eBook and audiobook formats. 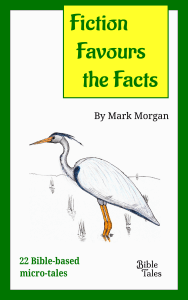 Another book of of Bible-based fiction.  22 more micro-tales. 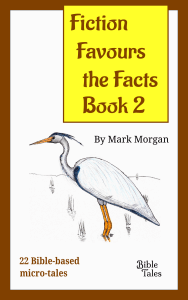 Yet another book of of Bible-based fiction with 22 more micro-tales in paperback, eBook and audiobook. 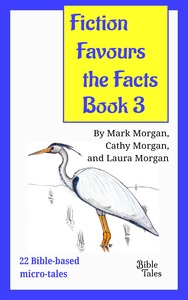 If you want to follow the progress on our various projects have a look at our work in progress page.

Like what you've seen about Bible Tales so far?