“Other gods” in the Bible 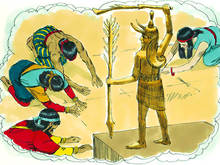 We often read of the worship of “other gods” in the Bible – in both the Old and New Testaments. In the Old Testament, we read of different nations worshipping their own individual gods, but the nation of Israel seemed to want to worship all of the available gods!

As history progressed and the end of the nation of Judah approached, the prophets of the time frequently referred to the nation’s habit of worshipping various gods.

Prophets before the captivity

The table shows clearly that Jeremiah used the names of the other gods most often in his writings. Daniel and Habakkuk do not use their names at all, while Ezekiel and Zephaniah only named other gods twice each.

As well as using a specific name for each god, other “catch-all” words are also used for “other gods” in the Bible:

The number of times the words occur are shown above by the numbers in brackets.

Many other words are used to refer to the worship of other gods, including “altars”, “green tree”, “high hill”, “high place”, “offerings”, “drink offerings”, “kneading dough to make cakes”, “gathering wood”, “kindling fire” and probably many others.

There is even a reference by Habakkuk to people whose own strength is their god (Habakkuk 1:11). This seems to be the most common form of false worship in the western world today along with the covetousness criticised by Paul as idolatry (Colossians 3:5; Ephesians 5:5).

There is a lot of concentration on other gods by these prophets, but vastly more on the use of “Yahweh” (“Lord”) or “God” to make it clear that the only real god is Yahweh, the God of Israel. If you are interested in the numbers, “Lord God” occurs 113 times in Jeremiah, 219 times in Ezekiel, 13 times in Daniel and 5 times in Zephaniah. The frequency is striking – well more than once per chapter on average.

As usual, these quantities and translations are taken from the English Standard Version (ESV). There will be some variation between versions.

Deities in the Hebrew Bible (Wikipedia)

Was it really so bad? (Bible Tales article)

This article on “Other gods” in the Bible is one of a series of articles on Jeremiah published as back-up material for the Bible-based fiction series Terror on Every Side!
[ More information | Purchase ]