In Australia, we use the Gregorian calendar (see https://en.wikipedia.org/wiki/Gregorian_calendar), which was first introduced in various Roman Catholic countries in 1582 and gradually spread over the rest of the world over the next 350 years. Although there are still many different calendars in local use around the world, the Gregorian calendar is by far the most common one used for international dates. According to this calendar, the average year contains 365.2425 days, due to the careful inclusion of leap days added according to a defined plan.

As far as we can tell from the Bible, particularly the law of Moses, the people of Israel used a lunar calendar that was linked to the solar year which controls our seasons. New moons were used as the start of months, as is most clearly shown in Numbers 28 where periodic offerings are commanded: first for daily sacrifices, then weekly and monthly (in verse 11), and finally for each national feast. In verse 11, many translations use an expression such as “the beginnings of your months” to translate this, while others use “the new moons”. 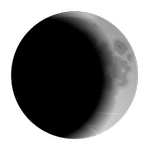 Different lunar calendars start the month at a different part of the moon’s cycle, and as long as it is consistent it doesn’t really matter. It is generally believed that in the Bible, the Israelites started the new day at sunset, while the new month in the Hebrew calendar is said to have started when the new crescent moon was visible at sunset.

The length of the lunar cycle from one new moon to the next is 29.530589 days, so months would normally alternate between 29 and 30 days, although over about 3 years one extra day will slip in.

On that basis, an ordinary 12-month year will have only 354 days, 11 days shorter than our common year. If such a calendar is used, the seasons will move later in the year by 11 days each year. After 3 years, seasons will have moved by a month, and after 9 years, the calendar would be saying it was time for spring to start when summer had already started. After only 17 years, the calendar would suggest that it was summer when it was actually the middle of winter.

This simply cannot work and so in the Hebrew lunar calendar still used today, mostly for religious purposes (https://en.wikipedia.org/wiki/Hebrew_calendar), a “leap month” is added every two or three years to bring the calendar and the seasons together again. There is no mention of this in the Bible, but it is hard to imagine any other method if months are to be based on lunar cycles.

When Israel was about to leave Egypt, God instructed them that the Passover was to occur in the first month of the year (Exodus 12:2) and that the Passover was to be followed by the feast of first fruits where the new fruit of spring was to be offered to God (Leviticus 23:4-21). In later times, these two feasts were linked in a fixed way and the name “the Day of Pentecost”, meaning “the 50th day” was used.

Why does this matter? Well, to keep the Passover in spring, adjustment was necessary, and adding extra months seems to be the only possible answer. It is suggested that an extra month was added at the end of the year where necessary (i.e. two twelfth months – Adar I and Adar II), based either on weather conditions or on a repeated cycle of years.

So where does all this fit into the Bible?

Let’s start by saying what we do not find in the Bible:

What we do find in the Bible are little items of evidence which are interesting, but don’t allow us to draw many conclusions.

In some places, when giving a date, Ezekiel specifies the number of the year and day but not the month (Ezekiel 26:1; 32:17 (Note that the ESV adds “the twelfth month” in the latter passage, along with a note that the Hebrew lacks these words)). Could these refer to a leap or intercalary month? There is no way of knowing.

In Australia, we would always use month names when referring to particular months, unless we were writing a short form of the date.  However, in the Bible, month names of not used very often.  In fact, in Jeremiah and Ezekiel, who both prophesied at the same time, at the end of the kingdom of Judah, month names are not used at all.  Normally, the month number is used, so we can look at the usage of each month number to see if we can find any hint of leap months in the Bible.

If a leap month was included in a consistent place in the calendar, it might still be given the same month number as the one that either preceded or followed it.  For example, if an extra month was added to the end of the year, but it was still called the twelfth month, we might expect to have the twelfth month mentioned more often because it could cover a longer time than ordinary months.  If we added that extra twelfth month every three years, we would have four months’ duration in three years, so we would expect to have about one third more references to the twelfth month.  Unfortunately, this is not a very significant difference when we look at the existing variation in the usage of month numbers in the Old Testament.  The usage is shown in the table below.  Note that this excludes references solely to the names of months.  Once again, we concentrate on Jeremiah and list the references to month numbers in Jeremiah and Ezekiel in separate rows.  However, the numbers for those two books are also included in the numbers for the Old Testament.

The two months referred to most often are the two months in the calendar with the most feasts: the first month (only 8 occurrences refer directly to the feasts) and the seventh month (of which 20 times refer directly to the feasts).  Of the other month numbers, the smallest number of references is three for the third month and the greatest number is 14 for the second month.

No clear-cut conclusions can be drawn, but if I had to guess where leap months might have been inserted, I would suggest that it was at the start of a year.  Possibly they would be inserted if there were no signs of spring at the end of the twelfth month.  However, this is just a guess.

The most common way of referring to a specific month is by month numbers, but some month names are used too.  However, these names tend to be in two groups: early names (used at the time of the  Exodus and the construction of the temple) and later, Babylonian names (used during and after the captivity, in Ezra, Nehemiah, Esther and Zechariah).  The two calendars seem to have lined up well enough that Jeremiah, Daniel and Ezekiel were able to refer to dates in terms of the years of Jewish and Babylonian kings interchangeably.

I have tried to limit this article to using Bible-based detail, since I have more confidence in it than in other histories.

If you want to read more on calendars, try the following links.  It is important to remember that many of the details in these references are based on much later times and much later evidence.