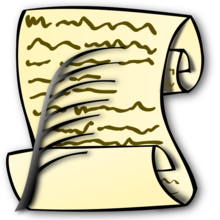 Nowadays we read text on screens or if we are old-fashioned like me, we use books. Also called a codex, the book as we know it combined the advantages of two different earlier methods of collecting written records. Pages in a book are a convenient rectangular shape. This was the main advantage of the clay tablets that were used for recording information in many ancient nations. Paper has the added benefit of being flexible, and this was the main advantage of scrolls.

In this background article, we look at scrolls, their characteristics, advantages and drawbacks.

A scroll is a long strip of flexible material which can be rolled up so that it will not take too much space. However, it normally only has writing on one side – not a very efficient use of materials. Even with the margins allowed for binding, printed books can use the available writing surfaces much more efficiently.

Plant material, particularly papyrus, was often used for scrolls. The papyrus plant was very common in Egypt in ancient times. The writing material of the same name was made from the cellulose pith in the middle of its stalk. Papyrus was cheap and easy to make in rectangular sheets. However, it could not be folded without cracking. To make a larger document, several sheets would be fixed together and rolled into a scroll.

Papyrus could be made in varying quality. Producing a page of consistent thickness was difficult, so the surface could be quite uneven, which made writing harder.

In dry conditions, papyrus lasted a very long time – ancient papyrus documents are still being found in Egypt – but it would rarely last more than a few decades in more humid climates such as Israel or Europe. The word “paper” in English comes from the word “papyrus”.

Well-prepared animal skins can also make very good surfaces for writing on. Parchment (normally made from goat or sheep skin) and vellum (normally made from calves) are the two names usually used, although the naming is not always consistent. The skins were not tanned – tanning would make the skin much darker – so parchment is not leather. The skins were prepared by soaking to clean them, scraping to remove the hair, and stretching. Various chemical treatments may also have been used over time.

Younger animals produce better skins for writing on, so parchment and vellum were expensive. A young lamb might provide enough skin for a high quality sheet of parchment about 30cm by 60-70cm.

The Great Isaiah Scroll found at Qumran is made of 17 sheets of parchment averaging 28cm high and 43cm wide. These sheets were stitched together to form a single scroll. Obviously, a single large scroll on high quality parchment would use the skins of quite a few animals.

It is likely that any books referred to in the Bible are intended to refer to scrolls, although the imagery of a book of life is probably just as good as a scroll of life.

References to literal books or scrolls start very early in the Bible and continue throughout. By the end of the book of Revelation, the total is about 200.

Some interesting details about scrolls in the Bible:

After 22 years of prophesying words from God, Jeremiah was told to write down every word God had ever said to him (Jeremiah 36:2). This was a big job. Jeremiah dictated all the words to Baruch, a scribe (Jeremiah 36:4). God’s instruction was given in the fourth year of King Jehoiakim and the scroll was ready to read to the people in the ninth month of the fifth year. A long time.

Sadly, the scroll was then taken and read to King Jehoiakim. After a few columns had been read, he cut off what had been read and threw it in the fire. He continued to do this until eventually all of the scroll had been burned up. Months of Baruch’s work had gone up in smoke.

God told Jeremiah and Baruch to do it all over again, and we are told that many more similar words were added also.

Several years later, when Jerusalem was under siege by the Babylonians, Jeremiah was told to buy some land which he did following a process that is somewhat reminiscent of land purchases today. Jeremiah had to get witnesses, sign two copies of the deed and have the witnesses sign also, then pay an agreed price. One copy of the signed deed was sealed, presumably to make sure that no-one made any unauthorised changes, and then both copies were put in storage, under the care of Baruch. God was using this as a sign that the nation would not be destroyed forever, but that after a time, buying and selling of land would begin again. Jeremiah had bought some land that was completely worthless and which he could not even visit because of the surrounding Babylonian army, but God’s message was made clear. See Jeremiah 32 for more information.

The book of Jeremiah is not in chronological order. Opinions vary as to why, but some traditions suggest that the scroll may have been cut into pieces for transporting to Egypt and subsequently mixed up. There is no way to know.

If you want a difficult but valuable challenge, try writing out one of the gospels from the New Testament. This is similar to the command God gave to the kings of Israel, that they should write out the book of the law for themselves (Deuteronomy 17:18-19). The job will take a long time, so make sure you allow some time every day – and don’t give up. Once you have finished, read it over and see how many copying errors you can find – or get someone else to do it for you. After this, I can guarantee that you will feel a much greater respect for the unknown men who have copied out the Bible over thousands of years and managed to achieve such incredible accuracy. If you have done this before, please comment below and let me know what you chose to copy.

if we endure, we will also reign with him