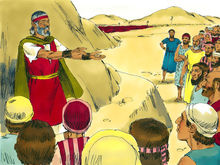 Nebuchadnezzar conquered the nation of Judah and destroyed Jerusalem and the temple in 587/586BC.  He captured King Zedekiah and killed his sons, then blinded him and took him away to Babylon, where he died in captivity.

Some people were left in the land under the care of Gedaliah, the son of Ahikam, who was appointed governor of the land,[1]Jeremiah 41:2 ruling from Mizpah, a small town about 12 kilometres (7 miles) north of the ruins of Jerusalem.

The Chaldean army departed, leaving only a small force of soldiers to help – or supervise – Gedaliah.  Soon afterwards, Ishmael, a member of the former royal family who was working for the king of the Ammonites, assassinated Gedaliah.  He also killed all of the Chaldean soldiers and Judean men who were helping Gedaliah, as well as 80 pilgrims who were passing through.  All of the others in Mizpah he took captive, intending to carry them away to the Ammonites.

The leaders of the forces of Judah that fought in the open country heard what had happened and pursued Ishmael,  When they caught up, they defeated him and rescued the people.

Fear dictated the subsequent events: with the Chaldean soldiers all dead, along with the appointed governor, the people were terrified that Nebuchadnezzar would return and wreak vengeance on the survivors of Judah.  They were certain that the Chaldean response would make the slaughter that had followed the defeat of Jerusalem seem kind and gentle.

Having travelled to Bethlehem in that fear, the refugees decided to ask Yahweh what they should do.  A wise decision, you would think – but only if they were willing to listen to his answer when he gave it.  Jeremiah asked God this question on their behalf, and they had to wait ten days for the answer.  However, when the answer came it was completely unexpected – and unwelcome…  Yahweh told them to stay put.  Stay in the land.  Forget about going to Egypt to escape, just rely on God to look after them.

This command demanded faith – more faith than the people of Judah had.  They still saw terror on every side and rejected God’s word through Jeremiah, denying that Jeremiah was speaking God’s word at all.

Jeremiah warned them that if they ignored God’s command, the sword would pursue them into Egypt.  They would find no safety there, just suffering and death.

Nevertheless, instead of obeying, they set off for Egypt.

So what happened to Jeremiah and the other people from Judah when they went to Egypt?  We know from Jeremiah 43 that first they went to Tahpanhes, and they seem later to have spread further out across Egypt (Jeremiah 44).

Although we have these basic details from the book of Jeremiah, they raise many other questions for which we do not have any answers: