Timeline of the prophet Jeremiah’s life 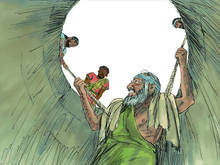 One of the most popular posts on the Bible Tales website is “Joseph: Timeline and family tree”, which presents a timeline of Joseph’s life, prepared as part of my research for the novel “Joseph, Rachel’s son”. Since it has been so popular, I decided to create a similar timeline of the prophet Jeremiah’s life.

This sounds  easy, but so many things about Jeremiah we don’t know – at least, not exactly.

For starters, we know that he began to prophesy in the 13th year of King Josiah’s reign, but we don’t know what age he was then. In Jeremiah 1:6, he complains that he doesn’t know how to speak because he is only a youth. The Hebrew word translated “youth” is used for a wide age range, from childhood to adolescence, but the task God gave Jeremiah fits more with what could be expected of a young man rather than a young boy. Anyway, God told him that being young didn’t matter because God would be with him.

Timeline of the prophet Jeremiah’s life

The series “Terror on Every Side!” assumes that he was 17 years old when this happened. I also use this assumption as the basis for the timeline of the prophet Jeremiah’s life shown below.

We know when quite a few of the events of Jeremiah’s life fit into history.   However, we have to guess how old he was when God first spoke to him, and work from there. 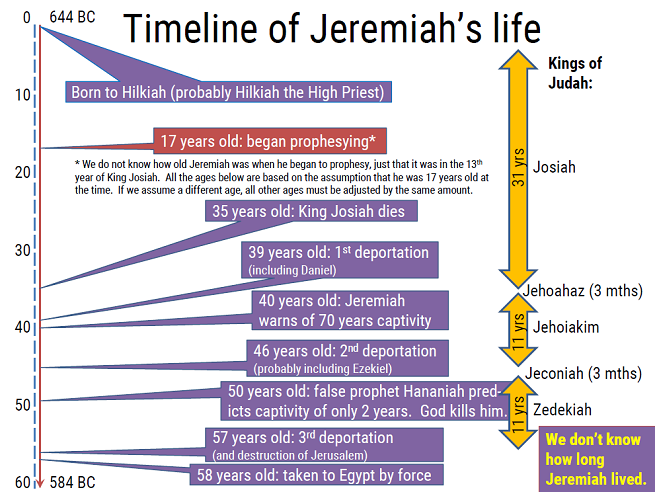 I have not included any Bible references in the timeline of the prophet Jeremiah’s life above because there is too little room, but I will include many more details below (including references).

Jeremiah prophesied for 18 years during the reign of King Josiah.  God spoke to Jeremiah for the first time in Josiah’s 13th year, but we only know of one other occasion when God spoke to him during Josiah’s reign (Jeremiah 3:6) – and we’re not told when in the 18 years it occurred.

God appointed Jeremiah a “prophet to the nations”, so he may have spent a lot of time outside Judah.

In the reign of Jehoiakim

Quite a few events took place in the 4th year of Jehoiakim, the son of Josiah, after Jeremiah had been prophesying for 23 years.[1]Jeremiah 25:1-3 If Jeremiah started prophesying when he was 17, he would have been 39 or 40 years old at that time.

The following events happened in that year, which was also the first year of Nebuchadnezzar, the king of Babylon:[2]Jeremiah 25:1

In the reign of Zedekiah

Zedekiah was the last king of Judah, and we’re told of several incidents in the 4th year of his reign.  This was just seven years before Nebuchadnezzar destroyed the kingdom of Judah and in that year:

The final siege and afterwards

Towards the end of the reign of Zedekiah, the king and his men forced Jeremiah to stay in Jerusalem. While he was there, King Nebuchadnezzar besieged Jerusalem. We know of the following events during that siege and shortly afterwards: