For those who don’t know, Jehoshaphat was the fourth king of Judah after the kingdom of Israel split in two – Israel and Judah – following the death of King Solomon.  Jehoshaphat was a righteous and faithful king who would be high on the list of the best kings of Judah – although he had a problem with being too tolerant of evil people. Here, we provide a timeline of Jehoshaphat’s life.

The first four kings of Judah can be summarised as follows:

Jehoshaphat was born early in the reign of Asa, and it is interesting to consider how his experiences as a prince might have affected his later life.

He would have been quite young (about 8-9) when Asa showed great faith and courage in the face of an attack by a one-million-strong army of Ethiopians.[7]2 Chronicles 14:9-15

This amazing victory would have encouraged Jehoshaphat to have faith in God.

Shortly afterwards, however, Baasha the king of Israel began to put great pressure on Judah.  Unfortunately, a year or two later, Asa’s faith failed him and he paid the Syrian king to attack Israel instead of asking God for help.  God sent the prophet Hanani to tell off Asa for his foolish choice,[8]2 Chronicles 16:7-9 but Asa was furious and would not listen.  Instead, he responded violently against the prophet and also oppressed some of the people.[9]2 Chronicles 16:10

About 40 years later, when Jehoshaphat was king, he found himself in a similar situation: God sent the prophet Jehu, the son of Hanani, to reprimand him.  Jehoshaphat responded in a much better way than his father had done, though.  All our lives, we see the actions of those around us, and this gives us a chance to consider what we might do in many situations before we have to decide in the pressure of the moment.  We should copy the good actions we see, but do our best to avoid the errors.

In the 39th year of King Asa’s reign, he became diseased in his feet.  As a result, Jehoshaphat may well have taken over some of the responsibilities of leading the kingdom.  About two years later, King Asa died and Jehoshaphat became king at the age of 35.  He reigned for 25 years and did his best to make sure that the nation knew about Yahweh and worshipped him.[10]2 Chronicles 17:3-9; 20:32  He also showed remarkable faith at times.[11]2 Chronicles 20 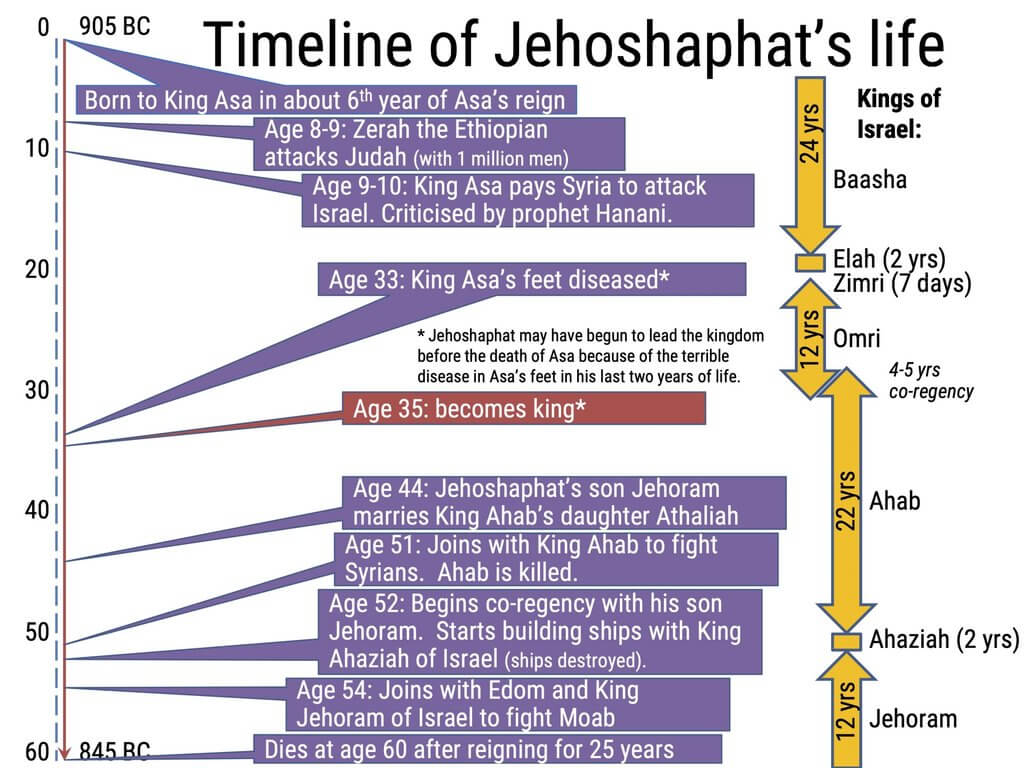 Our society makes a lot of the idea of tolerance, and expects Christianity to be all about unquestioning, unqualified love.  They believe it should be shown in the form of endless tolerance.

What lessons about tolerance should we learn from the reign of Jehoshaphat?

Jehoshaphat was friendly with the kings of Israel of his time: Ahab, Ahaziah and Jehoram.  They were all evil.  King Ahab was described as the worst of the kings of Israel up to that time,[12]1 Kings 16:30, 33; 21:25-26 egged on by his infamous wife Jezebel,[13]1 Kings 16:31; 21:25 yet Jehoshaphat fought alongside him in battle and made a marriage alliance with him (i.e., Jehoshaphat’s son married Ahab’s daughter).[14]2 Kings 8:16-18; 2 Chronicles 18:1; 21:5-6  Ahab was succeeded by his son Ahaziah, and Jehoshaphat made a partnership with him to construct ships for international trade.[15]2 Chronicles 20:35-37  Jehoram took over as king of Israel when his brother Ahaziah died, and Jehoshaphat travelled with him to fight against the Moabites.[16]2 Kings 3:5-7

How did God judge Jehoshaphat’s tolerance?

God was not pleased with any of these examples of cooperation with the enemy.[17]2 Chronicles 19:1-3; 20:37 (although God still saved Jehoshaphat when these things got him into trouble: 2 Kings 3:14-19; 2 Chronicles 18:30-32).  I think it is likely that Jehoshaphat was hoping to change their behaviour and lead the kings of Israel back to Yahweh their God, but it didn’t work.  Instead, it left the kingdom of Judah vulnerable to degradation from within.  Jehoshaphat’s son Jehoram and his wife Athaliah – Ahab’s daughter – were responsible for a disastrous time in Judah’s history where the terrible habits of Israel became common in Judah.  Siblings and babies were murdered because they might be a threat to the throne,[18]2 Chronicles 21:1-6; 2 Kings 11:1 and idolatry became normal.[19]2 Kings 8:26-27; 2 Chronicles 21:6; 12-15; 22:2-3; 24:7  Finally, it required a rebellion to get rid of Athaliah (who had made herself queen) and re-install a king from the line of David.  Jehoshaphat’s tolerance of evil had made these disasters much easier to achieve.

The book of Revelation contains letters from Jesus to seven congregations in Asia.  One of them was to the congregation in Thyatira[20]Revelation 2:19-28 and mentions a woman called “Jezebel”.[21]Revelation 2:20-23  Fascinatingly, given how much trouble Jehoshaphat’s tolerance caused, Jesus was criticising the believers in Thyatira for tolerating her and her evil behaviour.

Other timelines on Bible Tales:

A tale from the time of King Jehoshaphat.
eBook, paperback and hardcover to be released 14 December 2021 (God willing).