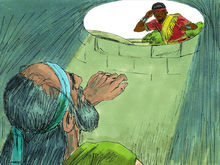 In many parts of the world, rainfall is not consistent or predictable, so water must be collected and stored to make sure there will be enough water when there is no rain for some time. Australia, where I live, is a very dry continent and in most areas, it would not be possible to live without storing large volumes of water.

Some areas of Israel are also very dry, with the annual rainfall generally decreasing as you go further south. Masada, a famous fortress constructed by Herod the Great near the southern end of the Dead Sea, had a dam and massive cisterns for collecting the occasional rain when it sparked flash floods in the area. Servants then carried water up from these cisterns to the citadel. The cisterns stored such vast quantities of water that a garrison of 1,000 people would have been able to survive for about 10 years – as long as they were not so profligate with water as Herod seems to have been.

To be useful in storing water, a cistern must be:

A cistern could be cut laboriously out of rock and would often be lined with plaster to reduce the amount of water lost through absorption or through cracks in the rock. A leaky cistern was no use.

Water was collected using channels shaped to direct water into the cistern. However, when rain starts and water begins to flow in channels where it has not flowed for some time, the water carries with it lots of accumulated dirt, leaves and other rubbish, not to mention bird droppings and the bodies of dead animals. Avoiding the contamination introduced by this “first flush” requires some careful design and is not easy. As a result, cisterns will normally accumulate mud and rubbish at the bottom, and can often contain somewhat dirty and unpleasantly flavoured water.

God highlights two of the problems with cisterns in a prophecy given through Jeremiah:

“for my people have committed two evils:
they have forsaken me,
the fountain of living waters,
and hewed out cisterns for themselves,
broken cisterns that can hold no water”

Life comes from God, and a bubbling spring with sweet, fresh and cool water was what God had offered Israel. Instead, his nation had rejected him and chosen other gods and other ways of life, which God compares with leaky home-made cisterns that cannot maintain life.

Cisterns are a protection against drought, but God points out to his people through Jeremiah that human plans for protection can never outlast God’s control of the natural world. In a section of Jeremiah which starts with the words “The word of the Lord that came to Jeremiah concerning the drought”, God said:

“Her nobles send their servants for water;
they come to the cisterns;
they find no water;
they return with their vessels empty;”

Then God follows this up with an explanation as to why the drought and other “natural” disasters would continue to happen to Judah, by reminding them of their faithlessness in following other gods:

“Thus says the Lord concerning this people:
‘They have loved to wander thus;
they have not restrained their feet;
therefore the Lord does not accept them;
now he will remember their iniquity
and punish their sins.’”

The enemies of Jeremiah the prophet threw him into a cistern, with the intention of leaving him to die (Jeremiah 38:1-13). The cistern had no water in it, only mud.

Some people suggest that this cistern could have been a cesspit.

The Bible shows no evidence of the word being used to mean a cesspit, although some cisterns were used to dump unwanted things (like carcasses – see Jeremiah 41:4-9).