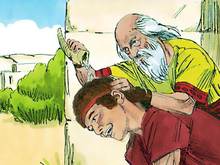 Many countries that have kings or queens, and even those with prime ministers or presidents, have ornate ceremonies for appointing a new person to the position.  The rules for choosing who the new leader will be and the associated rituals are considered important and followed carefully. The same was true for anointing Bible kings.

What happened to make a king into a king?

Here is a quick list of how some of the kings of Israel and Judah were made king.  A common factor is anointing.

From the list above, we conclude that anointing Bible kings was the ordinary procedure – normally done by a priest or prophet as a representative of God.  This is likely to have been followed whether or not the anointing was at the command of God.

There are many other references to kings being anointed.  David often refers to his predecessor King Saul as “the Lord’s anointed”, while God calls King Cyrus of Persia “his anointed” (Isaiah 45:1).  Several passages – sprinkled throughout the Old Testament – mention an anointed one, and are clearly referring to Jesus (e.g., 1 Samuel 2:10, 35; Psalm 2:2; Daniel 9:24-26).

The last five kings of Judah

Five kings of Judah reigned during the time while Jeremiah was a prophet before the kingdom of Judah was destroyed.  It is interesting to look at how these kings were appointed, but first there is one complication with these kings.

More than one name

Josiah was king when Jeremiah began to prophesy, and he was only ever known by that name.  However, the last four kings were all known by more than one name, which can be confusing.  Here are the kings in order, with the most common name for each highlighted:

For each of the last five kings, let’s look at who made them king and what ceremony may have happened when they were appointed.  There is no direct mention of any of them being anointed (although there is a suggestion of this with Zedekiah), but we can probably assume that they were all anointed, since that seems to have been the normal procedure.

When Amon his father was assassinated, his attackers were executed and Josiah was made king by “the people of the land” (2 Kings 21:24; 2 Chronicles 33:25).

When Josiah died, Jehoahaz / Shallum was also made king by “the people of the land” (2 Chronicles 36:1).

Pharaoh Neco deposed Jehoahaz / Shallum and appointed his older brother Eliakim / Jehoiakim as king (2 Kings 23:34).  Although there is no mention of him being anointed, it seems likely that he too would have been made king in the normal way for the kingdom.  Appearances are important, even when they are at the command of a foreign king like Neco.

When we discuss anointing Bible kings, everyone seems to assume that we all know that the oil used is olive oil, not automotive oil!  We’ll point it out here just in case, and observe that olive trees were common in Israel and olive oil made from pressing the olives was used for many different things, including anointing.