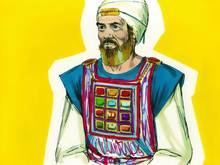 Jeremiah was a prophet, but he was also a priest.[1]Jeremiah 1:1  What do we know about Jeremiah’s genealogy?  At the start of his book, he is described as the son of Hilkiah,[2]Jeremiah 1:1 and we know that there was a High Priest called Hilkiah at that time.  Was Jeremiah the son of the High Priest? Hilkiah is called “Hilkiah the priest”[3]2 Kings 22:10, 12, 14; 23:24 and “Hilkiah the High Priest”,[4]2 Kings 22:4, 8; 23:4 but his father’s name is not mentioned.  Listing the name of a man’s father name was commonly used to distinguish between people with the same name. Yet it is only when we look in the genealogy of the high priests that we find Hilkiah’s father was called Shallum. This consistent use of the name “Hilkiah” without saying who his father was suggests that saying he was a priest was enough to uniquely identify him.

Jeremiah is identified as “the son of Hilkiah, one of the priests who were in Anathoth,” which suggests that the Hilkiah referred to was the only priest called Hilkiah at the time – who was also the High Priest. This is not absolute proof, but it does allow us to say that the prophet Jeremiah was probably a son of Hilkiah, the High Priest in the time of Josiah.  So the genealogy of the High Priests is likely to be Jeremiah’s genealogy.

Azariah replaced Hilkiah as High Priest, so it is likely that Jeremiah was not the oldest son.  However, it is possible that, despite being the oldest son, he was not made High Priest because he was causing too much trouble as a prophet! Nevertheless, there is no reference to this in Jeremiah or anywhere else, so it is more likely that he was a younger son.

We are also told of another son of Hilkiah – a man called Gemariah – who carried an important message to Babylon.[5]Jeremiah 29:3 He too was probably a younger son, and Jeremiah’s brother.

The genealogies of the High Priests

Lists of the genealogy of the High Priests are given in three places, with the list in 1 Chronicles 6:3-15 being the most complete. Genealogies in Hebrew can sometimes leave out generations without mentioning it because the word for “son” can equally mean “grandson” or simply “descendant”. The names in these lists are shown in the table below, with blanks shown where names are missing.

Eli and his family seem to have been High Priests despite the suggestion from some people that they are descended from Aaron’s youngest son Ithamar rather than Eleazar.  The High Priesthood – intended to be inherited by the oldest living son – is then said to have reverted to the “correct” line in the time of Solomon.[6]Possible support for this theory is found in connecting 1 Chronicles 24:6 with 1 Chronicles 18:16 and 2 Samuel 15:24.

Why does Jeremiah’s genealogy matter?

While writing a Bible-based novel on the life of Jeremiah (Terror on Every Side!) I found it helpful to try to locate him in the genealogy of God’s priests and to see how he fitted into a family of priests from Anathoth.

This article on Jeremiah’s genealogy is one of a series of articles on Jeremiah published as back-up material for the Bible-based fiction series Terror on Every Side!
[ More information | Purchase ]