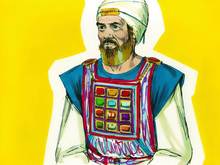 When God led the people of Israel out of Egypt to Mount Sinai, they quickly went astray while Moses was up on the mountain.  Only the Levites worshipped God as he wanted them to and so he selected them as his special tribe in Israel.  Not only that, but he selected Moses’ brother Aaron as priest, and said that his descendants after him would inherit this important task. Did they do the job well? Are we told what God’s judgement of priests was?

Jeremiah starts his book by telling us that he was a priest.  His family were all priests and his relatives would have been priests.  Priests are referred to in many places throughout the book of Jeremiah, with most of them being quoted as the words of God.

What was God’s judgement of priests in the time of Jeremiah?

Let’s summarise God’s attitude as found through Jeremiah’s writings – the books of Jeremiah and Lamentations.  I have split the passages into a few simplified categories and listed them below:

The numbers in each category show a very clear bias against the priests on God’s part.  18 passages are critical.  All except one of the four passages which are somewhat positive are promises from God for the future rather than any praise of their behaviour in the time of Jeremiah.  The only comment about slightly good work by a priest in Jeremiah’s time is about Zephaniah the priest in Jeremiah 29:29 – and even then, it is only by implication that we can say it reflects good behaviour.  Clearly, God’s opinion of the priests was not high.

The prophets contemporary with Jeremiah also contain some of God’s judgement of priests: Ezekiel (who was also a priest), Daniel, Zephaniah and Habakkuk. However, some of the passages in Ezekiel are more difficult to put in the categories above because they describe future worship in a temple and concentrate on a subset of priests – the sons of Zadok – because of their faithfulness.  Of course, if Jeremiah was a son of Hilkiah, the High Priest, he was one of those sons of Zadok.  We don’t know anything about the family of Ezekiel the priest, except for the name of his father, Buzi, which does not occur anywhere else in scripture.  Jewish commentators appear to think that he came from the family of Ithamar rather than the family of Eleazar from which Zadok came.  I have not come across any reason for believing this.

The references from Zephaniah are interesting because he spoke in the time of Josiah (probably towards the end of his reign) when you would expect the priesthood to have been better than in the times of the preceding and subsequent kings, but his two comments are entirely negative.

Once again, the only positive comments were related to a time in the future, except for a repeated reference to the sons of Zadok as having not gone astray in the past when the rest of the priests and Levites did so.  When is this talking about?  Let’s look at a few possibilities:

I have no real proof for this, but the times that seem most likely are the time of Solomon’s coronation and the time when Jeroboam corrupted Israel’s worship with the golden calves.  We do read of priests coming to Judah at that time, but the picture painted in 2 Chronicles 11:13-17 is of all priests and Levites coming to Judah, rather than just the sons of Zadok.  2 Chronicles 13:9 suggests the same thing.  Not only that, but 1 Kings 12:31 and 13:33 make it clear that Jeroboam appointed priests who were not even Levites.

The only other reference that could be important is to Azariah the priest in the time of Hezekiah who is said to be of the house of Zadok (2 Chronicles 31:10).  He observes that since the people had begun to bring offerings as God had commanded, the priests had been able to eat.  Maybe he and his family had been faithful during the times of evil kings before Hezekiah and had nearly starved.

Overall, the praise of the sons of Zadok in Ezekiel is quite puzzling and I don’t find my conclusion here very convincing – but nor is any other that I know of!  If you have any better ideas, please let me know.

Since Levites are connected to the priests, let’s look at references to them also.  The word only occurs in the last few chapters of Ezekiel in his vision of a temple.  Most of the references are just informational, but any that aren’t just giving information are negative:

Overall, the religious leaders in the time of Jeremiah are roundly condemned by God – a very sad situation when you think about how God chose them in the first place because they had chosen to be faithful to him.

The descendants of Abraham – the people – had gone astray.

The kings descended from David had gone astray.

The priests descended from Aaron had gone astray.

No wonder God destroyed the kingdom and sent his nation into captivity!