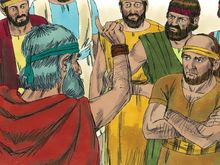 When we read of prophets in the Bible we can get the feeling that they all lived at different times from each other.  There is almost never any indication of different prophets meeting each other or working together.  However, there are just a few examples, including Moses and Aaron; Elijah and Elisha; Haggai and Zechariah; and two nameless prophets in the time of Jeroboam the son of Nebat and maybe some others.  What about the prophet Zephaniah?

Jeremiah had a prophetess (Huldah) and a few prophets living and prophesying at the same time as he did.

The prophet Zephaniah was another prophet who prophesied in the time of Josiah, just as Jeremiah did.  He mentions his lineage in the introduction to his prophecy, and this includes “Hezekiah” as his great great grandfather.  Going back so many generations just to identify one person’s lineage is unusual in the Bible.  This makes it more likely that the Hezekiah referred to is King Hezekiah.

The details given in Zephaniah 1:1 are:

If the Hezekiah mentioned is indeed King Hezekiah, Manasseh was, presumably, his oldest son, being 12 years old when he became king.  There are questions about co-regencies, but if we take the simple numbers, Hezekiah reigned for 29 years and at the end of that, Manasseh was 12 years old.  Manasseh reigned for 55 years and Amon for 2.  Zephaniah’s ancestor Amariah must have been a younger son – say 10 years old at the time Hezekiah died.

Members of the royal line seem to have got married at a very early age in that time, so if we take this to an extreme then:

In this scenario, the prophet Zephaniah would have reached about 13 years of age when Josiah became king.  This is probably the oldest he could possibly have been.  In all likelihood, he would have been younger than this – these figures are only possible if each generation was the oldest son.  Historically, God has worked much more often with younger children in families.

His message states only that it came from God during the reign of Josiah.  There is no indication of when in that 31-year period God spoke to him.  As with Jeremiah, Zephaniah’s message concentrates on coming judgement.  In the eighteenth year of Josiah, God gave the assurance that Josiah would see peace throughout his reign, and the prophet Zephaniah warns the people to act “before the decree takes effect” (Zephaniah 2:2).

Zephaniah 1:8 speaks of punishment of the king’s sons, which suggests that by the time the prophecy was made, they were old enough to have refused the good and chosen evil.  When Josiah died, Jehoahaz/Shallum was 23 years old (2 Chronicles 36:2) and Eliakim/Jehoiakim 25 years old (2 Chronicles 36:5), so if we work on 12 years old as the age at which they might choose their path (as Jesus did), that would make the prophecies likely to have been given in the last 11-13 years of Josiah’s reign – that is, starting in the eighteenth to twentieth years.

Alternatively, if we take the example of 20 years of age from God’s judgement in the wilderness, it could suggest the last 5 years of Josiah’s reign.

Zephaniah 1:9 talks about those who fill their master’s house with violence and fraud, and this is in close enough proximity to 1:8 to suggest that it is referring to Josiah’s nobles and officials filling Josiah’s palace with violence and fraud – without his approval, intent or knowledge.  This probably happened some years after the nation was cleansed in the 18th year.

On the basis of these details, I guess that Zephaniah began to prophesy in about the 25th year of Josiah, at the age of about 24.  At that time, Josiah was 33 and Jeremiah would have been about 29 if he was 17 when he began to prophesy.

Various parts of Jerusalem are mentioned including the second quarter (Zephaniah 1:10), which was the area in which Huldah the prophetess lived (2 Kings 22:14; 2 Chronicles 34:22).  Fascinatingly enough, the Bible only mentions the “second quarter” of Jerusalem in these three places, which all claim to be written at the same time.  It fits.

There is enough detail about Jerusalem in the book that I believe it is most likely that the prophecy was delivered in Jerusalem.

How strong is the argument?

For all of these conclusions about the exact timing of Zephaniah we have used logic and educated guesswork only.  There is no proof.

What do you think of the conclusions?