Some people have no children at all, while others have many children. However many we have, though, we are used to the fact that it normally takes about 9 months of pregnancy for each child. So what happened with the birth of Jacob’s sons?

At first glance, we could think that this 9 month limit wasn’t true in the family of Jacob, the son of Isaac! However, his was no ordinary family, thanks to the trickery of Laban, his father-in-law.  This post looks at Jacob’s speedy transformation from having neither wife nor child to having 4 wives and 11 sons.

While Jacob’s son Joseph was second in command in Egypt, his brothers came to buy grain because there was a famine in Canaan where they lived.

Joseph recognised his brothers and provided a feast for them. They did not recognise him, though; in fact, they were sure that he was dead – after all, they had sold him as a slave.  At that feast, he astonished them by arranging their seats in order of age.

Yet why should it be so amazing?  Surely just by looking at them an observer would be able to go some way towards ordering them by age?

Well, no!  This was an especially difficult case.  Not only did Jacob’s 12 sons have 4 different mothers, but the first 11 were born in only seven years.  No wonder they were amazed when an Egyptian, whom they were sure could not know them, somehow managed to put them in the correct order of birth from oldest to youngest!

How do we know that the first 11 sons were born in just seven years?

Genesis 31:41 tells us that Jacob had been with Laban in Paddan-aram for 20 years.  He had served 14 years to pay for his two wives and 6 years to take over the best of Laban’s flocks.

The first seven years paid for his first wife, Leah, then one week later he was given her sister Rachel as well.  This was based on an agreement that he would work another seven years for her.

During those seven extra years of work, the first 11 sons were born.  We know this because Genesis 30:25-28 tells us that Jacob began to be paid after the birth of Joseph, who was the 11th son.

So the twenty years were split in three:

From this we conclude that Joseph was born at the end of Jacob’s initial 14 years of service, probably just before he asked Laban for permission to return home.  At Laban’s request, Jacob subsequently stayed another 6 years, during which he acquired much of Laban’s livestock.  Thus, Joseph was 6 years old and his 10 older brothers were between 6 and 13 years old when they left.

From time to time I am asked how the birth of Jacob’s first 11 sons could fit into seven years.  Here is my answer.

For a start, we must acknowledge that these 11 sons came from four women: Laban’s two daughters, Leah and Rachel, and their two servant girls, Bilhah and Zilpah.  Sadly, both sisters believed that having children was essential to winning or keeping Jacob’s love.  The description of their machinations begins in Genesis 29:31 and continues through to Genesis 30:24.

A timeline built on this basis is shown below.[1]Note that the dates given in the timeline are not certain, nor are they important for this article.  There are a few possible ways of dating the time of Jacob and this is just one.  The important … Continue reading

Timeline: (click on the timeline to view the image full-size) 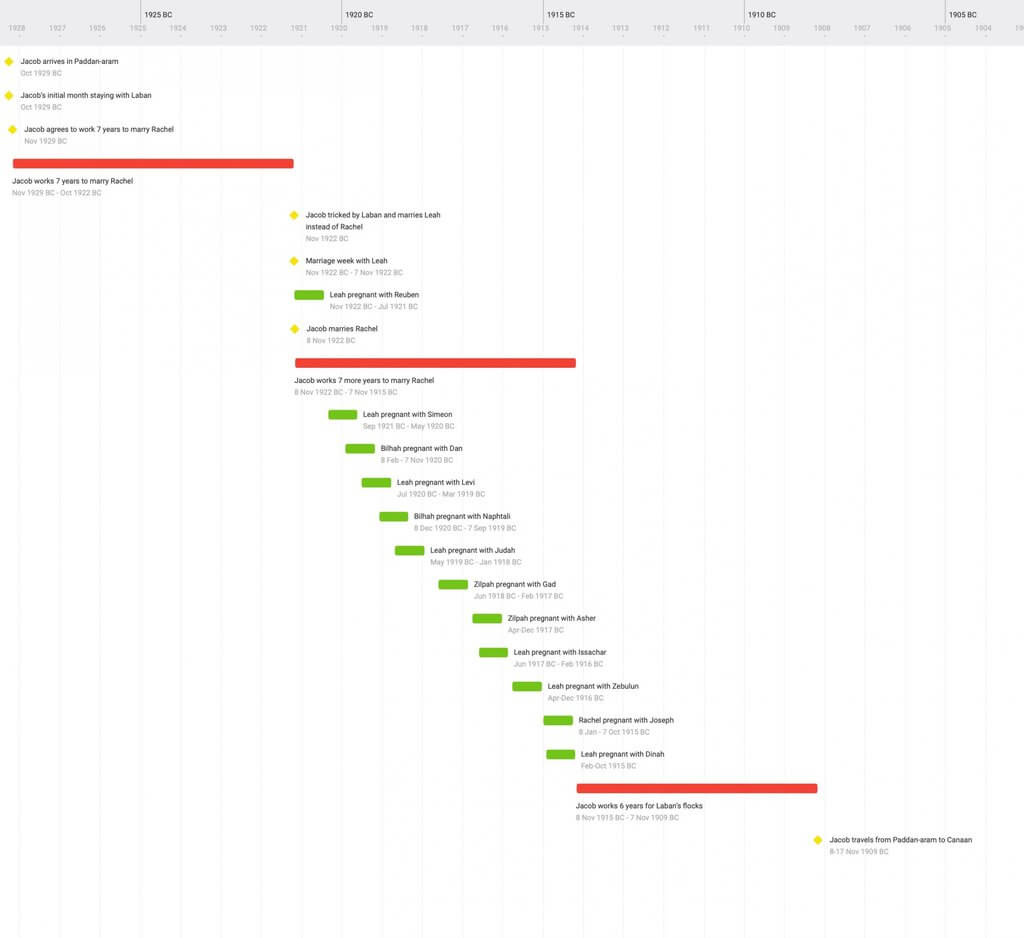 Overall, I think that the birth of Jacob’s sons could occurred in the length of about 8-9 ordinary pregnancies as an absolute minimum.  That is 72-81 months, and we have 84 months to work with.  I believe it can all work – just.

However, the timeline shows just how difficult it would have been to work out the order of birth of these 11 sons if you didn’t know what it was.  No wonder Joseph’s brothers were amazed when he put them in the order of their birth!

This is one of a series of articles on Joseph published as back-up material for the Bible-based fiction novel Joseph, Rachel’s son.
[ More information | Purchase ] 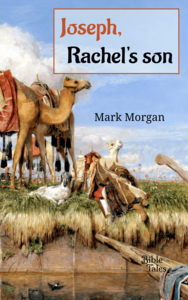