Mourning in the Bible 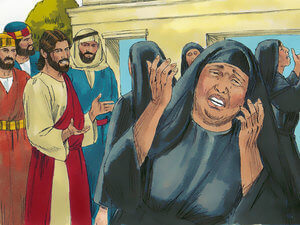 Mourning in the Bible

Death and mourning are subjects which became important for humans because of sin (Romans 5:12). Different countries have many different customs surrounding death.  Many ways of mourning can be seen around the world. Not only that, but customs have also changed a lot through time. There is quite a bit of variation in mourning described in the Bible too, with some differences based simply on whether the person who had died was respected or loathed! Let’s have a quick look at death and mourning in the Bible, particularly in connection with the time of Jeremiah.

Burial and the house of mourning

According to Ecclesiastes 7:2-4, the house of mourning is preferable to the house of feasting. However, God excluded Jeremiah from both (Jeremiah 16:5, 8). What is the “house of mourning”? It is unlikely to be a house in which a dead body would lie for viewing after death, because burial seems to have normally happened very quickly. In Jesus’ time, Lazarus had been in the tomb 4 days when he had been dead 4 days[1]. Obviously he was buried very soon after death, as was Jesus himself. Modern Jews apparently bury a body as soon as possible too.

Samuel was buried in his own house, and all Israel assembled to mourn for him (1 Samuel 25:1).  In such cases, maybe the dead person’s home was the “house of mourning” spoken of. At other times the expression could have been used symbolically to describe a state of mourning.

King Asa had cut out a tomb for himself in which he was laid on a bier with spices[2].

Mourning in the Bible continued for:

After Moses’ and Aaron’s time, we are told little about how people mourned, or how long mourning continued after death.

When David arranged for Uriah to be killed in battle, his wife Bathsheba lamented over her husband. David took her as his wife after the mourning was over. This may suggest a defined length of time for mourning[3].

The law of Moses (Leviticus 19:28; Deuteronomy 14:1) and Jeremiah (Jeremiah 16:6) both refer to people cutting themselves or “making themselves bald” in mourning for the dead. God condemned this behaviour, and many people assume that it was part of the worship of other gods.

A fire was made in honour of king Asa when he died (2 Chronicles 16:14).  By contrast, it is stated that no fire was made in honour of Jehoram, king of Israel,  as fires had been made for his ancestors (2 Chronicles 21:19). The passage about Asa does not seem to suggest that the fire was a cremation, but rather a large celebratory fire, possibly with spices, as was prophesied for King Zedekiah (Jeremiah 34:5). The same prophecy by Jeremiah mentions that spices had been burned for earlier kings.

Mourning in the time of Jeremiah

The death of King Josiah, the last ‘good’ king of Judah, was mourned by all Judah and Jerusalem.[4] Jeremiah and others wrote laments[5] just as David had done when King Saul and Jonathan died.[6]

Jeremiah 22:18-19 indicates that King Jehoiakim, the son of Josiah and third-last king of Judah, would have “the burial of a donkey”.  His dead body would be thrown out of the city and left to rot with no-one mourning his passing.

Jeremiah’s prophecies promised that many, many people would die, unburied and unmourned when God’s punishment of his nation was executed.[7]

Two interesting customs of mourning are mentioned in Jeremiah 16:7: breaking bread with the mourner and giving him a “cup of consolation”.  Fascinating, when considered with the last supper – Jesus eating and drinking with his disciples before dying on the cross.

God put limitations on mourning for priests. When the existing High Priest died, his oldest son would immediately become High Priest. When Aaron died, God told Moses to dress Eleazar in Aaron’s clothes even before Aaron died (Numbers 20:26, 28). God said that Aaron’s garments were to be worn by his descendants and that they were to be anointed and ordained in them and wear them for 7 days thereafter (Exodus 29:29-30; Leviticus 21:12).

Other priests were allowed to make themselves unclean in mourning for their father.  Even younger sons of a High Priest could mourn their father in the ordinary way (Leviticus 21:1-2). Jeremiah was probably a younger son of Hilkiah the High Priest, since Azariah was the one who took over as High Priest. Nevertheless, Jeremiah was probably not allowed to mourn for his father when he died because of other rules from God. When God specifically forbade Jeremiah from marrying, he also forbade him from joining celebrations (Jeremiah 16:8) and mourning (Jeremiah 16:5). It is clear that if Jeremiah did not join in mourning his father’s death, his reasons could have been misunderstood.  Family, relatives and friends could easily have questioned his motives, causing great friction. Obedience to God’s simple commands can sometimes have far-reaching and unexpected effects.

This article on Mourning in the Bible is one of a series of articles on Jeremiah that we have published as back-up material for the Bible-based fiction series Terror on Every Side!
[ More information | Purchase ]