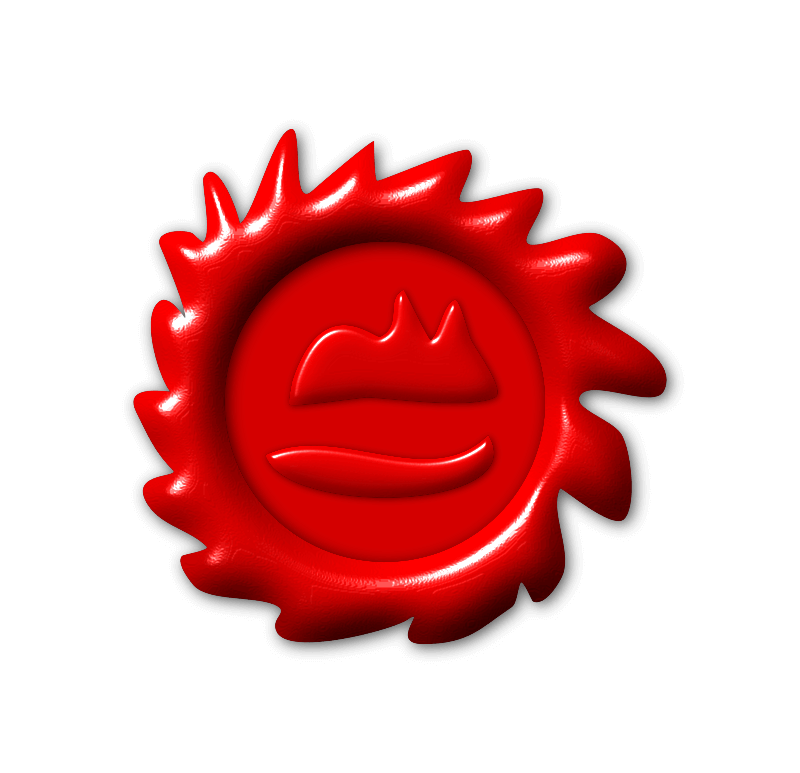 When God challenged righteous Job to acknowledge his sovereignty, he said that the light of dawn makes the features of the landscape stand out in the same way as when clay is shaped under a seal (Job 38:12-14). The glare of light can highlight the detail of shapes in just the same way as the glare of truth can highlight dishonesty. Seals and signets were used to avoid dishonesty, so let’s see how.

Why use a seal?

Throughout the Bible we read of people sealing documents to make sure they were not changed. A scribe would use damp clay to form a seal, then press a carved object into it.  Anyone trying to tamper with the document would damage the impression left in the clay.

Later in Job, God describes the scales on Leviathan’s back as being shut up tightly, as with a seal (Job 41:15). This makes it clear what a seal was meant to do. A document could be sealed and dispatched: if the seal was still intact when it arrived, the recipient could have confidence that the document had not been tampered with – in fact, not even read. Isaiah depicts the same situation when he describes giving a sealed scroll to someone and asking them to read it. There is no surprise when they say that they cannot, because it is sealed (Isaiah 29:11).

Queen Jezebel wrote letters in King Ahab’s name and sealed them with his seal (1 Kings 21:8). This description suggests that letters were “signed” – possibly just with a written name. Paul said that this writing of his name was a mark of the letters he wrote (2 Thessalonians 3:17). A seal or signet ring made an impression that was a distinctive identifier showing who had sent the letter.

In the time of Nehemiah, a covenant was made by the people and their leaders’ names were written on the document, which was then sealed so that it could not be altered.

In Esther 3:10, we read of King Ahasuerus having a signet ring which he unwisely took off and gave to Haman, who used it to write letters “in the name of king Ahasuerus”. After Haman proved himself untrustworthy, the king gave the ring to Mordecai instead (Esther 8:8-10), who wrote other letters to counteract the letters of Haman.

It appears that the king’s name was written on a letter or edict which was then rolled up or folded in such a way that the contents could not be seen – in much the same way as we use an envelope now. The letter was also held closed with a seal made of clay or some other material that would show clearly if anyone tampered with it. The impression of the king’s seal or signet ring was impressed on the seal so that the recipient could be sure who had sent the letter and that it had not been changed.

Daniel was put into a lions’ den and King Darius used his signet ring to seal the stone that covered the entrance (Daniel 6:17). His lords also used their signet rings to do the same. In this case, many witnesses were “signing” a statutory declaration that Daniel had been put into the den. When the seals were all intact in the morning, it was proof that no-one had interfered with the sentence. This confirmed that Daniel’s survival was not due to human interference. The same idea was used when sealing the stone over Jesus’ tomb (Matthew 27:66).

Ephesians 4:30 uses the picture of a seal also:

“And do not grieve the Holy Spirit of God,
by whom you were sealed for the day of redemption.”

The expression “grieving the Holy Spirit of God” seems to be equivalent to breaking a seal early – before the day of redemption at Jesus’ return. If we break the seal, the confidence, security and credibility of the promise of redemption are destroyed. Maybe Hebrews 6:4-8 is describing the result. A seal can only provide confidence while it is unbroken.

Sometimes, we hear the expression “Signed, sealed and delivered”. It is not really connected with the use of a seal as we have looked at here. However, if you are interested in looking at what it means, have a look here: http://blog.legalsolutions.thomsonreuters.com/uncategorized/signed-sealed-delivered-what-does-this-mean/

Cylindrical seals were also used to sign documents or seal important things. They were pressed into clay and rolled across it to make an impression from all around the cylinder.  But you couldn’t wear a cylindrical seals on your finger like a ring, so how were they carried?

In the unsavoury incident with Judah and Tamar (see Genesis 38:6-26), Tamar asked for Judah’s signet, cord and staff. The signet was probably a signet ring worn on a finger. The cord may have been used to carry the signet ring when its owner was doing something which might damage the ring, or which would be difficult to do while wearing it. However, it is more likely that the cord was been threaded through a cylindrical seal. If so, asking for the cord was asking for Judah’s seal, meaning that Tamar had Judah’s two most powerful proofs of identity.

When Joseph was a slave in Egypt, after he had interpreted Pharaoh’s dreams of corn and cattle, Pharaoh took the signet ring off his finger and put it on Joseph’s hand (Genesis 41:42).

In the time of Jeremiah, God says that even if Jehoiakim’s son Jeconiah (Jehoiachin) was God’s own signet ring, even so he would tear him off and get rid of him (Jeremiah 22:24). For this comparison to convey its message effectively, a signet ring must have been considered very important – probably something that a king should never be without.

This prophecy refers to events at just the right time in the story of Jeremiah to suggest a way for people to identify the body of King Jehoiakim. Volume 4 – “The Darkness Deepens” has used it in that way.

How long will a seal last?

Normally a document was tied up with string to stop it being tampered with.  Clay was shaped around the knot to make sure it wasn’t secretly undone.  While the clay was just wet enough, a signet ring or cylindrical seal was pressed into it.  If the clay was tampered with, the impression would be distorted and not match the seal.

Ordinarily, dry clay will gradually crumble and fall to pieces, but if the imprinted clay – called a bulla – is fired like pottery, it will last a very long time, just as pottery does. So why would the clay of a seal ever be fired like this?

The answer is simple: If a library of documents catches fire, the documents inside will burn, generating the high temperatures needed to convert dry clay to pottery. This will destroy the documents, but the fired clay bullae will last a very long time.

…and what do we find?

According to the Bible, Jerusalem was conquered by Nebuchadnezzar, king of Babylon, in the time of Jeremiah. It was then destroyed by fire. Royal archives and any personal collections of documents would all have been burned. Since hot fires make bullae last, there should be many for archaeologists to find among the ashes of buildings!  That is, as long as the Bible is correct.

This is exactly what we do find – confirming once more that the Bible is a reliable record.

In “official” digs, bullae have been found imprinted with the seals of various people named in the book of Jeremiah:

Quite a few other bullae refer to people mentioned in the time of Jeremiah, but their sources are unknown.  In many cases their authenticity has been challenged.

Some bullae are sold on the black market and so their origin is unknown. They may have been found in illegal excavations or stolen, or they may even be forgeries – manufactured by cheats and made to look old. Artefacts presented from more official excavations are less likely to be fakes.

In a famous legal case which began with the laying of charges in late December 2004, the Israeli Antiquities Authority charged some collectors and dealers in antiquities with having forged objects or inscriptions. The claim was that in many cases, modern inscriptions had been added to ancient objects to increase their value. After almost 8 years, despite input from many experts in various fields, the trial concluded in 2012 without any of the defendants being convicted of any of the forgery charges. However, charges of dealing in stolen antiquities were sustained for at least one of the defendants.

But can't we tell a fake?

Determining whether or not an artefact is genuine can be very difficult. A top-notch forger is aware of the testing methods that will be employed to test the veracity of an artefact and will do their very best to outwit the checkers. The claims and counter-claims made by dealers and experts can all seem completely reasonable, but not even experts can be sure in all cases. As research methods have continued to develop, old forgeries have become easier to identify. Sadly, this means that we must treat all astonishing discoveries with suspicion for decades, particularly if they do not come from formally approved “scientific excavations”.

So if someone offers you a newly-discovered digital wrist-watch worn by the prophet Jeremiah – ask questions! You may not be able to get replacement batteries for it….

It appears that some fake bullae have been made and sold on the black market. One example is a bulla bearing a variant of the name Baruch, the scribe who wrote out scrolls of Jeremiah’s words, which has been identified by various experts as a fake. Of course, it is not impossible for forgeries to come from “scientific excavations” either.

When people can become rich and famous by discovering ancient objects, the temptation is great.  Some people will make their own “discoveries”, working hard to make them look genuinely ancient.

If you want to know more…