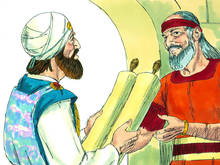 In the time of King Josiah, the book of the law was found in the temple of Yahweh. It was read to Josiah and the words he heard caused him to tear his clothes and weep (2 Chronicles 34:19-21, 27; 2 Kings 22:11, 19) because the nation had not obeyed the laws it contained. Josiah expected that the punishments promised in the book of the law would follow.

As a child, I always wondered what the book of the law was and how it had been lost. Was it one or more of the books of the Bible? As I was writing the section of Terror on Every Side! Volume 2 – As Good As It Gets which tells of these momentous events in the eighteenth year of King Josiah, I was forced to decide what I believed it was.

So what was the book of the law, and what were the punishments it promised for disobedience? Here are my conclusions.

Moses was given many commands and laws by God. Ten in particular were collected together and are popularly known as “the Ten Commandments”, although this name is only used three times in the Bible (Exodus 34:28, Deuteronomy 4:13 and 10:4). In the Bible, they are more commonly called “the testimony” (Exodus 31:18; 40:20), from which also comes the names “the tabernacle of the testimony” and “the ark of the testimony” since the ten commandments were to be stored in the ark. along with a jar of manna (Exodus 16:33-34) and Aaron’s rod that budded (Numbers 17:10).

During the time of Samuel (see 1 Samuel chapters 5 and 6), the ark of the testimony was captured by the Philistines and only returned seven months later after various plagues were sent by God. It may have been during this time that the jar of manna and Aaron’s rod were removed. By the time of King Solomon, only the tables of stone with the ten commandments were left inside the ark (1 Kings 8:9).

In summary, the “testimony” generally referred to the ten commandments, written on two stone tablets by the finger of God.

The “book of the law”, however, seems to have been a larger collection of the laws which God gave Moses. We read of Moses writing it in Deuteronomy 31:9-13 and 24-29, with the instruction that it should be kept with the ark of the testimony as a witness against the nation. The book was always to be available so that the behaviour of the nation could be compared with the behaviour God had commanded, and the clear warning was given that Moses knew the nation would not keep God’s law.

Joshua was told by God that the book of the law was to be with him, in his mouth and in his mind. Then he could carefully obey the commands it contained and be blessed with success (Joshua 1:8).

Kings were commanded to copy out the book of the law by hand. They were to keep it beside them all the time and read it all the days of their lives (Deuteronomy 17:18-20). There is no record of any king of Israel or Judah ever obeying this command, but it may have happened. The closest implication we have is when Joash was made king at the age of seven and we are told that Jehoiada the priest gave him a copy of the testimony (2 Kings 11:12). This may well have been a copy of the ten commandments, or it may have been the more detailed book of the law. Whichever it was, sadly, Joash did not keep to the laws of God for all of his life. After the death of his foster father and mentor, Jehoiada, he abandoned the worship of God and ended up killing Zechariah, Jehioada’s son.

Contents of the book

What did the book of the law contain? Moses is described as writing all of the laws of God in a book. The later parts of Deuteronomy contain a few references to the book of the law surrounding the section where Moses is recorded as writing this book. The references are all warnings that the nation must obey the laws they have agreed to in their binding covenant with God (Deuteronomy 28:58, 61; 29:21; 30:10).

In a few places we are told of details that are found in the book of the law:

All items that are referred to as being in “the book of the law” are found in the books of Moses. In particular, though, they are all found in Deuteronomy. The name “Deuteronomy” means “second law”, the retelling of the law, and it seems to me that “the book of the law” is most likely to be the book of Deuteronomy as we have it in the Bible or something very similar to it. The curses that worried Josiah so much are probably those included in Deuteronomy 28. Those curses were fulfilled around the time when the kingdom of Judah was destroyed and the survivors taken into captivity.

Use of the book

We read of the book of the law in various different parts of the Bible.

The Kingdom of Judah:

After the exile and return to Israel:

It is good to see that after the rediscovery of the book of the law in the time of Josiah, it was not lost during the exile, but was available to be read to the people by Ezra, who was probably a close relative of Jeremiah’s.