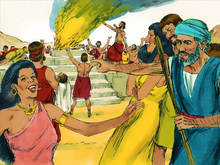 Can a land be unclean?

When I was growing up, my family followed a Bible reading chart to make sure that we read all of God’s word and not just the parts that seem initially to be more interesting.  After a while I started to recognise that there were some fascinating details in unexpected places – including God’s opinion of what moral or spiritual pollution is.

As a teenager, I noticed that there were several times during the year when we read of various things that made the land of Israel unclean. But was it the physical earth of the land that was meant or did it mean something else?

I was intrigued and decided to look at the subject in a bit more detail. This proved useful when writing the series Terror on Every Side! on the life of Jeremiah because there are several places in Jeremiah that include the same message.

“And I brought you into a plentiful land
to enjoy its fruits and its good things.
But when you came in you defiled my land,
and made my heritage an abomination.”

How could the land of Israel be defiled in God’s eyes?

God had already answered that question in his unfolding interactions with Abraham and through the law he gave to his people by Moses.

From Abraham to Moses

So let’s start with what God told Abraham. It makes a fascinating story. God had promised Abraham and his descendants the land that is now Israel, but they would not be given it immediately. God told him:

“Then the Lord said to Abram,
‘Know for certain that your offspring will be sojourners
in a land that is not theirs and will be servants there,
and they will be afflicted for four hundred years.
But I will bring judgement on the nation that they serve,
and afterward they shall come out with great possessions.
As for you, you shall go to your fathers in peace;
you shall be buried in a good old age.
And they shall come back here in the fourth generation,
for the iniquity of the Amorites is not yet complete.’ ”

Abraham’s descendants would have to wait 400 years to inherit the land because the Amorites weren’t yet bad enough. I feel that I am showing patience when I wait 10 minutes for someone to arrive, but God’s idea of patience is much broader and deeper.

Spiritual pollution and the land of Canaan

When God was about to lead Israel into the Promised Land, he gives quite a lengthy explanation of the situation in Leviticus 18. He lists (and forbids) many sexual sins and the offering of children to idols, then says:

“ ‘Do not make yourselves unclean by any of these things,
for by all these the nations I am driving out before you have become unclean,
and the land became unclean,
so that I punished its iniquity,
and the land vomited out its inhabitants.’ ”

What an intriguing picture this paints of the process – seen from God’s point of view. Sin made the people unclean, which in turn made their land unclean. As a result, God punished the land, which therefore ejected its inhabitants.

God subsequently warned the people of Israel to obey his commands:

“ ‘lest the land vomit you out when you make it unclean,
as it vomited out the nation that was before you.’ ”

This helps us to understand why Abraham and his descendants had to wait before they were given the Promised Land. Then we might ask if this uncleanness of the land is specific to Israel only. To answer that question, we need to go back to the beginning.

You don’t need to read far though Genesis before you see God speaking about a connection between the behaviour of people and the ground.

After Eve and Adam ate the fruit of the tree of the knowledge of good and evil, God told Adam that the earth was cursed because he had chosen to listen to his wife instead of obeying God’s command (Genesis 3:17-18). Thorns and thistles would make life on the land hard. Sin had cursed the ground in a physical way.

In Genesis 4, Cain murdered Abel because of jealousy, and God says that Abel’s blood is “crying to him from the ground”.

We see that God connects our behaviour to the land in which we live. The earth itself shows God how the people who live in it have been behaving. Obviously, God sees things we cannot see.

Let’s consider in more detail what pollutes a land in God’s eyes.

What makes a land unclean?

In speaking to Israel about murder, God says:

You can’t read, watch or listen to news for very long without coming across comments about pollution or other effects of human actions on the environment. But this is mostly chemical pollution rather than moral pollution. Clearly, God views and describes things very differently from how we do.

To show that this is not just an isolated example, God also says to Isaiah:

“ ‘The earth lies defiled under its inhabitants;
for they have transgressed the laws,
violated the statutes,
broken the everlasting covenant.’ ”

Many environment activists would strongly agree with the first part of the the verse, but equally strongly disagree with God’s subsequent statement that the pollution most important to him is caused by sin!  In God’s eyes, moral and spiritual pollution make a land unclean.

Unfortunately, the people of Israel did not obey God’s commands and so they polluted the land just as the nations that had lived in it before them had done. Once again, God showed patience, but after about 800 years, his patience with Israel had run out. We are told that:

“The Lord, the God of their fathers, sent persistently to them by his messengers,
because he had compassion on his people and on his dwelling place.
But they kept mocking the messengers of God,
despising his words and scoffing at his prophets,
until the wrath of the Lord rose against his people,
until there was no remedy.”

“No remedy” was chosen as the title of Volume 5 of the series Terror on Every Side! because it reflects the fact that the time had come when nothing – not even God’s astonishing patience – could put off the punishment God had promised.

The result of spiritual pollution

The Babylonians came and destroyed the kingdom of Judah, killing its people or carrying them into captivity. Few remained, and for 70 years the land of Israel enjoyed its sabbaths, and was cleansed of Israel’s polluting behaviour.

Some other Old Testament passages that link spiritual pollution and the physical land are shown in the table below.