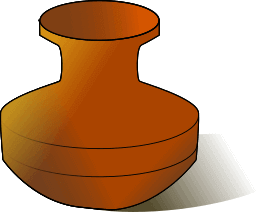 Nowadays in western countries, we use pottery much less than it was used in Bible times.  This is mostly because of the easy availability of plastic, glass and metal.  However, this was not always the case and in Israel, the most common artefacts found in archaeological excavations are pieces of broken pottery.

Pottery can be made to widely different standards depending on the quality of clay used and the temperature of firing.  We use the term “earthenware” now to refer to pottery fired at a relatively low temperature – below 1,200C.  When fired at this temperature, pottery is not waterproof.

In Bible times, some pottery items were made for special or decorative use and would be made of finer clay containing less sand or grit, while others were just for short term menial use and made as cheaply as possible.  The quality mattered little.

We are used to very thin walls on cups and bowls, but in ancient times the sides of such objects would have been much thicker.  They would have felt quite different to our lips compared with the plastic or metal cups we normally use.

Here in India where I am at the moment, it is common for street vendors to use small clay bowls as disposable cups for tea and coffee, showing the same short life expectancy for earthenware.

Once a pot was broken, however, it still had some interesting uses.  For example:

“And [Job] took a piece of broken pottery with which to scrape himself while he sat in the ashes.”

Also, at that time, the equivalents of paper were expensive, so broken shards of pottery could be used for writing short messages on, or for children to practice their writing.  A shard with writing on is called an “ostracon” (the plural is “ostraca”).

As with many other everyday objects, the most important references to pottery in the Bible are symbolic.  God is pictured as a potter by Isaiah:

In the same vein, Jeremiah was sent by God to watch a potter at work and he records what he saw there:

Before a pot is fired, it can be reshaped, and God can work with us as people if we are like soft clay.  But if we are already like a pot that has been fired, we match another picture God showed to Jeremiah when he sent him to buy an earthenware flask and speak to some of the elders of Judah:

“Then you shall break the flask in the sight of the men who go with you,
and shall say to them, ‘Thus says the Lord of hosts:
So will I break this people and this city, as one breaks a potter’s vessel,
so that it can never be mended.”

Many of the Dead Sea Scrolls were kept in pottery containers, and it was the sound of breaking pottery that attracted the attention of the Bedouin boy who discovered them when he threw a casual stone into a cave holding some of the scrolls.  The containers were meant to protect the scrolls so that they could last a long time in the extremely dry conditions near the Dead Sea in Israel.

God told Jeremiah to buy some land at a time when Judah had been invaded by the Babylonians.  He was enacting a lesson from God that this disaster would not be the end for Judah – the nation would return from captivity.  Jeremiah was told to make sure that the purchase deeds were kept in an earthenware pot to last a long time (Jeremiah 32:9-15).  Nobody has yet found the deed of purchase, but maybe it is hidden somewhere waiting to be found.  Whether it still exists or not doesn’t really matter.  What does matter is that the prophecy was fulfilled.  Jews are buying and selling land in Israel today.  Not only did they return from captivity as Jeremiah predicted, but they subsequently returned from another captivity as well.  That too had been predicted by God.