Moving the Ark of the Covenant 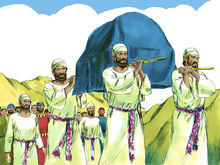 The Ark of the Covenant was a gold-plated wooden box that God told Moses to make in the wilderness. On top was a lid with two cherubim facing each other and made of pure gold.  Two tables of stone sat inside the box, with God’s law written on them.  The ark represented the presence of God and was a place where God met with his people. As the most holy of the articles of worship, it sat in the innermost room of the tabernacle.  However, the Israelites packed up the entire tabernacle – including the Ark of the Covenant – when they travelled in the wilderness.  God gave special rules about moving the Ark of the Covenant – they had to be very careful.

King David wanted the Ark of the Covenant of God near him, so he arranged to bring it into Jerusalem as part of a huge national celebration.  The ark was travelling smoothly on a cart when suddenly the oxen pulling the cart stumbled and the ark wobbled.  Tragically, the driver of the cart – a man called Uzzah – put out his hand to steady it, and God struck him dead.  David cancelled the celebration and moved the ark into the nearby house of Obed-edom.  This event is the subject of a micro-tale found in Fiction Favours the Facts – Book 3.

Since I wrote that story, several people have asked me questions about this man, Obed-edom.

These questions have revolved around who Obed-edom was, his nationality and possible genealogy. The reasoning behind the questions seems to be that David would not be likely to put the Ark of the Covenant in the care of a man who was not even an Israelite. This question is discussed further in the post Obed-edom the Gittite, however, part of that investigation involved the issue of exactly who was permitted to carry the ark.  So what are we told about it?

Examples of carrying the ark

Let’s look at examples to see who actually carried the Ark of the Covenant before God.

Deuteronomy 31:9 also describes the priests as Levites who carried the ark (cf Deuteronomy 31:25, which only says “Levites” – but of course, all priests were Levites).

We conclude that it wasn’t just any Kohathites who could carry the ark: it had to be carried by priests.

When David first arranged for moving the Ark of the Covenant into Jerusalem, it was carried on a cart. This was wrong – as David acknowledged when he tried again later. The second time, he said that none but the Levites were to carry the ark.[4]1 Chronicles 15:2 Does that mean just any Levites? 1 Chronicles 15:11-12 tells us that David called Zadok and Abiathar the priests and other leaders of the Levites and told them to arrange for the carrying of the ark, noting that God had broken out against them and killed Uzzah because they had not done it correctly the first time.[5]1 Chronicles 15:13 1 Chronicles 15:14-15 tells us that the priests and Levites consecrated themselves and the Levites carried the ark of God with the poles as Moses had commanded.

So who did carry the ark?

Was it the priests or some other Levites?

From the commands in Numbers and Deuteronomy and the examples in Joshua, I expect that the priests carried the ark while the Levites praised God as they walked.

However, we also find one more hint and another concrete example that, put together, tie up the loose ends for me and finally clinch the matter.

The hint is in 1 Kings 2:26. Solomon was king by then, and dismissed Abiathar from his position as priest for supporting Adonijah in claiming the kingship. In this verse, Solomon mentions that Abiathar had carried the ark of God before David. In fact, he may have carried the ark from Obed-edom’s house to the place David had prepared for it: at the very least, we know he was involved in the planning.

The final example occurs well after the death of Obed-edom, but shows that David had thoroughly learn his lesson. Solomon built a temple for God on Mount Moriah[6]2 Chronicles 3:1 and was moving the Ark of the Covenant from the City of David into the temple. 2 Chronicles 5:4 says that Levites carried the ark, while 2 Chronicles 5:5 says Levitical priests brought it up. Once again, priests were Levites, so the first statement isn’t wrong, it’s just that the second is more specific.  2 Chronicles 5:7 repeats that the priests carried the ark and placed it in the inner sanctuary of the temple.

Based on the evidence of God’s commands and the examples we have, I conclude that the intention from start to end was for the priests to carry the Ark of the Covenant. Priests were Levites. They were also Kohathites, and Kohathites carried most of the holy items from the tabernacle.

The Ark of the Covenant was the most holy of all the holy items in the tabernacle. The Kohathites who were not priests could carry other holy items, but not the ark.

Only priests could carry the Ark of the Covenant.

This is one of a series of articles on King David published as back-up material for some Bible-based micro-tales – short stories contained in the series of books: Fiction Favours the Facts.
[ More information | Purchase ]