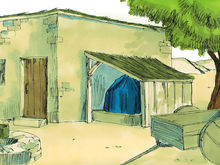 King David wanted the Ark of the Covenant of God near him, so he arranged to bring it into Jerusalem on a cart as part of a huge celebration. However, the oxen pulling the cart stumbled and the ark wobbled. Tragically, a man called Uzzah who was driving the cart put out his hand to steady it and was struck dead by God.

David cancelled the celebration and moved the ark into the nearby house of a man called Obed-edom. This event is the subject of a micro-tale found in Fiction Favours the Fact – Book 3.

Since I wrote that story, several people have asked me questions about this man, Obed-edom.

These questions have revolved around who Obed-edom was, his nationality and possible genealogy. The reasoning behind the questions seems to be that David would not be likely to put the Ark of the Covenant in the care of a man who was not even an Israelite. As an intriguing follow-up to this idea, a search of the Bible shows that the name Obed-edom is not unique, but we’ll get to that later.

Let’s start with the question of nationality.

Obed-edom is described as a “Gittite”, so let’s look at what that means.

The English Standard Version (ESV) uses the description “Gittite” for three individuals and one group of people:

The King James Version (KJV or AV) uses the word for one more group of people:

The ESV translation of this as “those of… Gath” seems to be an interpretation of “Gittite” in the original, although it is a reasonable assumption given the context.

The common understanding is that Gittites come from the Philistine town of Gath. A look at the list above seems to support that idea also, particularly when we look at the verses in their context.

Some have asked why David would have Gittites with him at all, and further, why Gittites would live in Jerusalem. The details given in 2 Samuel 15 seem to answer this question. However, we need to look at some background first to be able to understand it. At one stage, king Saul chased David all around the south of Israel. Finally, David decided that if he didn’t leave the country completely, he wouldn’t be able to escape Saul’s determined pursuit. So David fled Israel and went with his men to Achish, king of Gath,[1]1 Samuel 27:2 and stayed in the land of the Philistines for 16 months.[2]1 Samuel 27:7 He only left because the Philistines sent him away just before the battle in which Saul was killed.

When David returned to Israel, 600 Gittites followed him, and Ittai was one of those. What an amazing leader David must have been to attract 600 men – from another nation – to leave their homes and follow him!

In 2 Samuel 15, we see David, now the king of Israel, once again having to run for his life. This time it was because his son Absalom was trying to take over the kingdom. David was leaving Jerusalem, and the Gittites were leaving Jerusalem with him, so presumably they lived in or near Jerusalem. Obed-edom may also have been one of the 600 who had followed David years earlier.

One of David’s mighty men was a Benjaminite who was also called “Ittai”.[3]2 Samuel 23:29 Perhaps some names were used by both Philistines and Israelites.

Some (possibly beginning with J J Blunt in “Undesigned Scriptural Coincidences”, Part 2, Section 8 (https://biblecourses.com.au/blunt/)), have suggested that “Gittite” could also refer to someone from Gath-rimmon, the name of at least two towns in Israel: one in Dan (Joshua 19:45; 21:24; 1 Chronicles 6:69) and one in Manasseh (Joshua 21:25).

While this may be true, there is no reason or evidence to believe it actually was the case.

Based on the usage of the term “Gittite” in the Bible, the most obvious conclusion is that Gittites were people who came from the Philistine town of Gath.

However, we also mentioned the intriguing situation with the name “Obed-edom”, so now let’s take a roundabout look at that.

Caring for the ark

Some say that David would not leave the ark in the house of a foreigner. Obed-edom, they say, was a Levite: in fact, a Kohathite, one of the very men intended to look after the ark.  Let’s look at this claim.

Firstly, we need to acknowledge that there is more than one man called Obed-edom in the Bible. This is shown when 1 Chronicles 16:38 lists two Levites called Obed-edom. One was to minister regularly before the ark, and one (the son of Jeduthun) was to be a gatekeeper. Two Obed-edoms in one verse is clear proof that the name was not unique!

The name “Obed-edom” occurs 20 times in the ESV.  Let’s see if we can work out how many people are referred to in those uses.

Here is a list of descriptions of the men these verses refer to:

So how many different Obed-edoms are there? It seems impossible to tell with certainty, but the distinctions give some hints.

We conclude that at least four men were called Obed-edom – maybe more.

One other possibility to think about: sometimes when people migrate to another country that uses a different language and different names, they find that their existing name is difficult for their new friends to pronounce, so they choose a name that is more common in their new home. It is possible that Obed-edom the Gittite did that. We don’t know.

Back to the question of whether being a Levite would qualify Obed-edom to look after the ark. As has been mentioned, some suggest that if Obed-edom came from Gath-rimmon – a Kohathite town – then he could have looked after and even carried the ark.

A little bit of background will help with understanding the next first few steps in this investigation.

God gave large areas of the land of Canaan to different tribes so that they would live together in family groups, but the tribe of Levi was to be different. They were to be spread throughout Israel with the responsibility of teaching and explaining God’s law to the people in all of the other tribes.[4]Leviticus 10:8-11; Deuteronomy 17:9-11; 33:8-10 To achieve this, God gave the Levites many towns spread all over Israel: a town here, a town there.

Some of these towns were given specifically to the priests (descendants of Aaron), while others were given to the other families of Levites.

Both of the towns called “Gath-rimmon” were given to the Levites, specifically the Kohathites (Joshua 21:20). However, they were definitely not given to the priests, since the priests’ towns are listed immediately beforehand in Joshua 21:13-19.

This is of interest because the Kohathites were to carry many of the items of the tabernacle:[5]Numbers 4:15; 7:9; 10:21: however, the ark was a different matter.  I go into this question more thoroughly in the article Moving the Ark of the Covenant. The details discussed there convince me that only priests could carry the ark. Kohathites could carry other holy items from the tabernacle, but not the ark.

[1] There is a basic difference between these two records which otherwise seem to describe the same four incidents. However, 2 Samuel 21:19 talks about the death of Goliath the Gittite, while 1 Chronicles 20:5 refers to the death of a brother of Goliath. The Treasury of Scripture Knowledge suggests this came from a copying error while 1 Chronicles 20:5 has the correct reading. See https://www.biblestudytools.com/concordances/treasury-of-scripture-knowledge/2-samuel-21-19.html.

This is one of a series of articles on King David published as back-up material for some Bible-based micro-tales – short stories contained in the series of books: Fiction Favours the Facts.
[ More information | Purchase ]