How should Christians use money? 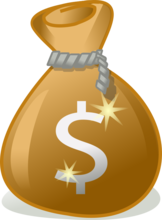 Money is mentioned more than 200 times in the Bible, starting with God’s requirement that even slaves bought with Abraham’s money had to be circumcised as part of God’s covenant with him (Genesis 17:12-13).

Money in the Old Testament

So the Old Testament provides a balanced presentation: God delights in the righteous and will bless them, but those who glory in riches will not last.

A very good summary is given in Proverbs:

“Remove far from me falsehood and lying; give me neither poverty nor riches;
feed me with the food that is needful for me,
lest I be full and deny you and say, “Who is the Lord?”
or lest I be poor and steal and profane the name of my God.”

Money in the New Testament

What did Jesus do with his money? 2 Corinthians 8:9 tells us that though he was rich, yet for our sake he became poor. This could be figurative, or it may be literal, describing how he disposed of the rich presents he was given by the wise men from the east. In 2 Corinthians 6:10, Paul talks about his own position and that of his helpers: “… as poor, yet making many rich; as having nothing, yet possessing everything.” Earlier, Jesus’ disciples stated that they had left everything and followed Jesus, and that’s where I want to start looking at Jesus’ teachings about this.

Luke 18:18-27 tells a well-known story about a rich ruler who went to ask Jesus about what he should do to inherit eternal life. Jesus reminded him of the commandments and the ruler confirmed that he had kept them all. These obviously came first. But this man wanted to know what more he could do. Jesus told him to sell what he had and give it to the poor, and then to follow Jesus. Sadly, the man just couldn’t do it. Jesus laments just how hard it is for rich people to enter the kingdom.

The more we hold on to our money,
the tighter its hold upon us.

I have heard it said that this is the only place where Jesus required this of anyone; that this man must have had a particular problem with money; and, finally, that it does not apply to us.

Let’s look at some other passages and then you can make up your own minds.

The Gospel of Luke

We’ll stick to Luke. Perhaps he had a particular interest in this subject, I don’t know. Whatever the reason, Luke reports details of Jesus’ words about money that none of the other gospels include.

In Luke 12:29, we read Jesus’ instructions that we should not worry about what we eat or drink, but should always seek God’s kingdom first. Just a few verses later in Luke 12:32-34 he tells them to sell their possessions and give to charity. In short, this is a pretty good matching passage with Luke 18:22, isn’t it?

The link between having money and treasuring it also matches.

A couple of chapters later in Luke 14:27, Jesus says that we can only be his disciples if we carry our own cross as he did. He then tells a parable about counting the cost, and when it concludes, he adds:

“So therefore, any one of you who does not renounce all that he has cannot be my disciple.”

Now that’s a challenge, isn’t it? This is part of what Jesus is talking about in carrying our cross and counting the cost. Jesus’ disciple must give up all his own possessions.

So I’ll leave you to decide: was that rich ruler the only one Jesus told to dispose of his goods? We’ve just looked at two more examples where Jesus uses very similar words.

However, I don’t want to stop there. Let’s go back to Luke 12 and see some more of Jesus’ teachings.

In Luke 12:13, a member of the crowd asks Jesus to intervene in an inheritance dispute. He may have been completely justified, or not – we don’t know – however, Jesus doesn’t answer his question. Instead, he says:

“And he said to them, ‘Take care, and be on your guard against all covetousness, for one’s life does not consist in the abundance of his possessions.’ ”

Do we ever feel like taking our money problems to Jesus as these people did? Jesus had a searching eye. Jesus went on to tell a parable about a rich fool who had lots of plans for the future of his goods, but none for his own future with God.

In Luke 14:15-24, Jesus tells the parable of the man who gave a big dinner and invited many to attend.

Their responses are illuminating: Luke 14:18, bought a piece of land; Luke 14:19, bought five yoke of oxen; Luke 14:20, married a wife (Paul and Jesus both warn about the distractions of that).

Goods can easily blind us to the important invitation we have received. Don’t get led astray by goods.

So, should we sell everything and give to the poor?

Let’s look at the evidence in just these few chapters of Luke.

Luke 18:22 is clear and simple for the rich ruler at least. No doubts. Sell all and follow Jesus. Should that apply to us?

Luke 12:33 is clear and simple. No doubts about its meaning. Jesus says to his disciples: Sell your possessions. Are you his disciple? Should that apply to us?

In Luke 14:33 Jesus is speaking to the multitudes and tells them they can’t be his disciples if they don’t give up all their own possessions. Very simple. Does it apply to us?

I think this verse is linked with Luke 16:9, where Jesus told his disciples: “And I tell you, make friends for yourselves by means of unrighteous wealth, so that when it fails they may receive you into the eternal dwellings.”

This verse is a little obscure, but seems to tell us to use money (unrighteous wealth or mammon) to make God our friend, so that when money doesn’t have any value any more (at the judgement), we will be welcomed into God’s kingdom. We can also link the verse back to Luke 14:33, since using our possessions for God’s work is just the same as giving up our possessions.

Are you willing to use your money to help people in need or do you hold on to it tightly?

The more we hold on to our money, the tighter its hold upon us.

More than 70 years ago, a good booklet was written by the late F. Mitchell on how Christians should use their money. We think that it’s worth reading, so we have made it available for you to download below (although we don’t agree with everything in it).  Three versions of the booklet are available:

Sometime, we hope to issue a significant revision of the booklet, but this is still in progress.

Some other passages in the New Testament also refer to money and give us plenty to think about, including:

The “Bible Money Matters” website has a list of Bible verses that talk about money and related matters. See “Bible Verses About Money: What Does The Bible Have To Say About Our Financial Lives?”.