Terror on Every Side! Volume 1 – Early Days: Reviews

If you have read (or listened to) Volume 1 – Early Days and would like to leave a review, feel free to do so in the comments below. Please note that if you do so, your comment may be included as a review in the list below. Comments are moderated for offensive content and spam, so there will be a delay before your comment appears.  We hope these Terror on Every Side! reviews encourage you to try reading the series. 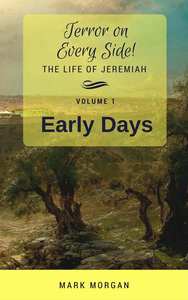 Terror on Every Side! Reviews

“An immensely readable work of fiction that will help you understand the prophet Jeremiah as never before. The author has done extensive research to pull this rich story together with plenty of footnotes and references to help explain. What isn’t fiction is the word of God and his message which shines throughout this story.”

[ a friend ] sent me over a copy of your book on Jeremiah’s early years a couple of weeks ago. I loved it! You’ve done a really great job of writing it and it makes the story of Jeremiah come alive. I had never heard or thought about it in that way before. So thank you so much for all the work you put in to it.

…There was only one thing I found disappointing: I was deeply engrossed in the story when suddenly it ended. My mother in law read it too and she had the same reaction. So we are both looking forward to the second installment!

I am SOOOOOOOOOOOO glad to see part 2 is now available….

As I was really upset when I reached the end of Part 1 – because I could not keep on reading!!!! Excellently done, and making Jeremiah so real, and so wondrously spiritual, learning and growing in God’s love and ways….. I thoroughly enjoyed Part 1 and will have to read it again and again!

The combination of imagination and close observation of the text is great – exactly what I hoped.

A fascinating look at the early life of the Biblical prophet Jeremiah. The author takes the Bible record and fleshes it out in an interesting, accurate and thought-provoking way. It’s not a light, fluffy read, but nor is it something heavy that you have to wade through. The story is brought to life amazingly – you will never look at the book of Jeremiah the same way again!

Part of a longer review from the “The Testimony” magazine, March 2017…

In late 2016 the first volume in the series Early Days, was published in book form. It covers about six months in the life of the teenage Jeremiah. Written engagingly in the first person, as the imagined autobiography of Jeremiah, the author uses a colloquial and colourful style to develop a personal memoir which allows us to see events through Jeremiah’s eyes.

Although a work of fiction, the book draws heavily upon the Bible text, with footnotes indicating the basis for many of the events recorded. At times the author extrapolates a suggestion from the text and at other times invents information to support the narrative: in these cases, the author indicates through footnotes the basis for his suggestion or acknowledges that a point is entirely speculative. The author helps us to capture the colour and emotions of daily life in Judah in the days of Josiah.

While focusing on the life and experiences of Jeremiah, the author includes the prophet’s summary of the recent past, particularly the reign of Manasseh, to explain the context for the society to which he was sent.

Presented as having been compiled after the fall of Jerusalem, the story starts when the prophet is seventeen and reveals his musings as he struggles with his calling. We witness his anxiety about the solemn task he is called upon to perform, his reluctance to act, and his inability to avoid his challenging commission.

At seventeen, Jeremiah is still living at home with his parents and brothers. Suggesting (with some biblical support) that Jeremiah’s father was High Priest at that time, it is not surprising that his messages create tensions within his family. Jeremiah is also presented as admiring the piety and the reforms of King Josiah, and this creates tension for him when his pronouncements appear to implicate the king directly.

While Josiah is presented as being receptive to Jeremiah’s messages, several of his closest advisers are not as comfortable. Some, like Shaphan and Ahikam, are somewhat sympathetic but far from convinced; others, such as Maaseiah, are vehemently hostile to Jeremiah from the start. The book draws out the divided loyalties of a leadership not fully committed to the reforms of Josiah.

A feature of the book is the way it casually introduces themes of relevance to believers today. For example, it highlights the negative effects of compromises when believers seek to blend the worship of the God of Israel with the ‘worship’ of false gods. This was a common problem in the time of Jeremiah and remains a common problem today.

At 174 pages, Terror on Every Side! The Life of Jeremiah, Vol. 1 – Early Days is a short, fast-paced book which will be enjoyed by readers of all ages. It covers just the first few months of Jeremiah’s ministry and for that reason may be especially appealing to teenagers. Included at the end of the book is a glossary of the characters mentioned. Most of these are characters from the record in Jeremiah, and Bible readers who find it hard to remember who is who as they read Jeremiah may find this list helpful.

Volume 2, As Good As It Gets, was released on 30 January [2017] as an eBook serial. This continues where the first volume left off, with the eighteen-year-old Jeremiah reliving the excitement of the discovery of the Law and the response of Josiah and the nation. It is intended to publish this volume in hard copy format later.

The book under review is available in hard copy (in two font sizes) or electronically in a range of formats: MP3 download, MP3-CD and audio CD set (five CDs). Orders may be made via the author’s website, www.BibleTales.online. Copies of the book are printed on demand in Australia, the UK and North America, and orders are sent directly from the printer, minimising shipping costs for those countries.

Note that “Volume 2 – As Good As It Gets” is now
available in eBook and paperback form.